Mobile Apps & Services
I detest the values of the Daily Mail in Britain so I have logged into upday and 'hidden' it as a source.
But still, days later, if I swipe left on my phone's main screen, Samsung does this to me: 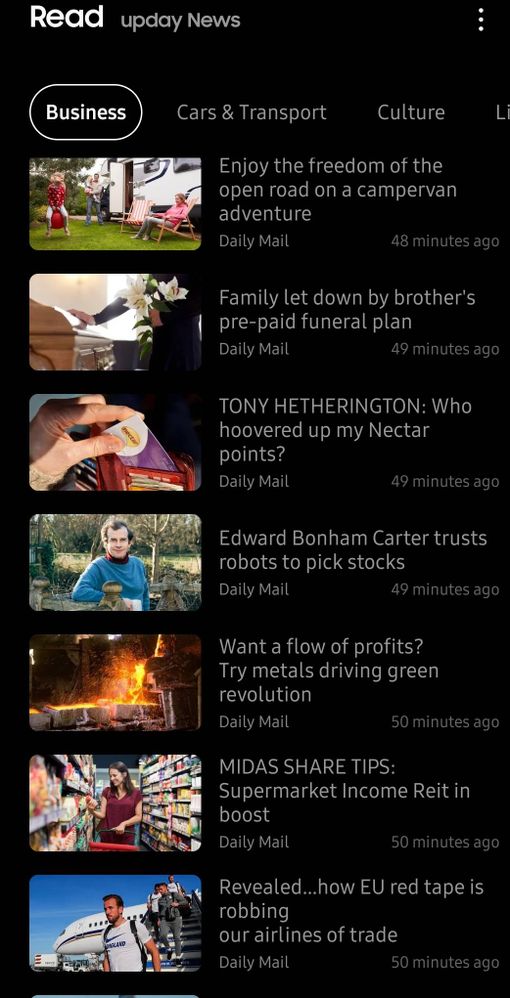 How do I make it stop? Why are Samsung forcing on to my phone something I have expressly said I do not want to see?
2 Likes
Share
Reply
3 REPLIES 3

Mobile Apps & Services
I found the content similarly poor so ended up disablling upday. Also I wasn't a fan of Samsung Free either I remember it being clickbaity articles but maybe I'm getting it confused with upday. Are you on Android 11? I find Google Discover much better once you teach it for a few days what you like and dislike but I'm not sure if it's available without the latest version of Android. I personally turn off all the recommendations from paywall news sources, specific news outlets that don't deserve a penny of advertising revenue, tinker with interests and turn off all the reality TV garb which was endless. Now I get readable articles.

Anyone with the latest software who is unsure how to do this, you swipe to the left of the home screen to find it but I think you first have to change it over from Samsung Free. You do it by long pressing down anywhere on your home screen then selecting it by scrolling to the left you 'll see it there below Samsung Free. I'll maybe reuse Samsung Free at some point to see if it was as bad as I remember 🤷
1 Like
Share
Reply

@alpinesi: Although I understand that you have tried this already, please click on a Daily Mail article in your newsfeed > Tap on the source of the article at the bottom of the page > Hide All News From Daily Mail. Now, if you head to Upday> Tap the 3 dots > Settings > Hidden Sources, is the Daily Mail listed here?

@AndrewL, I confirm the source is hidden in upday where you say. Also the other version of it, ie MailOnline. It doesn't appear then I click into the app, but it is there on the front page as per my screenshot (along with loads of clickbait garbage, but that's another complaint). Totally unacceptable from Samsung.

@SXM, my phone is an S20 with latest upgrades so I see from other users I sadly don't have the luxury of S21 owners to replace this rubbish with the Google newsreader.

I've deleted my account from Samsung Free/Upday and even ditched the UI now to try Nova Launcher. This at least allows swiping left from the Home screen to have functionality, even if not a newsreader.
0 Likes
Share
Reply