Hi I use my galaxy watch with my asus Zenfone 5, and when i try to configure Samsung pay it starts a download on my smartphone, but when the download ends nothing happens and if i try to open the samsung pay page from the galaxy watch plug-in it starts again the Download.

Does anyone have had problems using this with non Samsung smartphones?

This issue can be solved in anyway?

Good to know that you got yours working now. I tried the suggested method above, even used the latest version of the APK (released 4th Dec 2018) - stopped, cleared cache, uninstalled wearable, restarted my phone, reinstalled wearable, installed the APK, then boom- it still says that my watch (R800 galaxy watch 46mm) MAY not be supported, and suggested to send an error report which took forever. Will try to call Samsung about this.

GeorgeC
Navigator
In response to Dinno101

I think it's a good idea to contact Samsung support.

The .apk of Watch Plug-in which is stored on apkmirror repository seems to be bugged.

dbvirago
Apprentice
In response to GeorgeC
I understand that's how it's supposed to work, but for myself and others, it didn't. The manual install worked for me. I read several other posts where contacting Samsung support was just a monumental waste of time.
0 Likes
Reply
Highlighted

Dinno101
Explorer
In response to GeorgeC

So after speaking with Samsung, I have come to the conclusion that my device WILL not be supporting Samsung Pay, for the reason that it was made in Vietnam. I have contacted Samsung Vietnam about this, but because they do not sell the Galaxy Watch there, cannot help with this issue.

GeorgeC
Navigator
In response to dbvirago

I understand your perspective and I also understand how it should work, it seems that the malfunction was caused by a bug that prevented the app installing/updating properly and that was fixed in a later version - I don't have an Android non-Samsung phone to test unfortunately.

Regarding contacting Samsung - I had mixed experiences, but it's not like there is another place to go and get support - we're on a Samsung board

I'm glad you were able to get it to work and if you have time and are willing, maybe you can make a step-by-step tutorials for other to follow.

1. Device was made in A, B, C, Z country - hardware speaking

3. If you puchase the device in UK from an online source that puchased the device from another country, you will have non-UK software on the device and UK specific features will not work (Samsung Pay is not launched for example in all countries and in UK it has TfL (for example) while in France they don't have TfL (they have another transit system that may work the same way or in a different way)). Even if Samsung Pay works on a device that was sold by Samsung France, it may not accept a UK issued debit/credit card (geo-fencing for example) - as Samsung Pay UK software is specific to UK and Samsung Pay France software is specific to FR - just an example.

4.Depends where (country) you purchased the device and what software is on that device as each market has it's own specific things. If the devices was purchased in UK from a Samsung UK partner and has UK software, then it should work without any problem even if from a hardware perspective was made in Vietnam.

Can you please let me know:

a) when you setup the device for the first time, what was the default language that was displayed? If the device is with UK software, it should be English (UK)

b)can you go to Dial pad on your gear and enter *#1234# and let me know what you have under Version?

Dinno101
Explorer
In response to GeorgeC

Thanks for taking the time to reply.
My device was ordered from an online store (TobydealsUK). I am using the device in UK. The box says that my device was made in Vietnam, and because of the Spanish language at the back of the box, suggests that its to be sold in Spain.

English was the startup language I had upon starting the watch. The manual came in two languages, English and Spanish.

My watch details are

GeorgeC
Navigator
In response to Dinno101

I have the same software as you and same device. Looking on the website under Galaxy Watch 46mm, there is a small disclaimer saying "****May not be compatible with Samsung Pay" which makes me think it may be a non-UK product with UK official software (the device was flashed with the UK software).

Samsung Pay is available in Spain as per this: https://news.samsung.com/global/samsung-pay-is-now-available-in-spain and this https://www.samsung.com/es/samsung-pay/ but I don't know if you can add non-Spain cards to it (Santander bank is present in UK and also in Spain).

dbvirago
Apprentice
In response to GeorgeC

Yeah, I had read several posts saying that the problem had been fixed, but according to the app, I have the latest release and I still got the same result as others.

As far as a tutorial, I simply downloaded the file from a link early in this thread. When I went back to settings and hit Samsung Pay, It looked the same, except this time, it knew the filesize (30.4Mb) and it went through with the install instead of stopping after a second. As soon as it was complete, the app started to open, followed by two more updates and then it was working. I put the file in my downloads directory, but I'm not sure if I accidentally picked the right one, or the app knew how to find it.

GeorgeC
Navigator
In response to dbvirago

@Dinno101 - No, my watch was reset and had no apps on it. After I installed Galaxy Wearable, I launched Samsung Pay from there and it installed it on the watch (and appeared in Apps on phone). 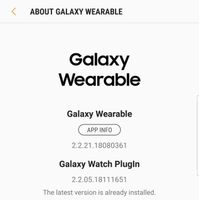 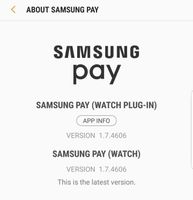 @dbvirago - the catch is that Galaxy Wearable is like a container - it holds several apps (Pay, Health, etc.) and installs them on the gear only when they are launched. It installs them by downloading the software from the Samsung servers (the apk that you installed from apkmirror).

I would expect that the update rate of things on Samsung servers is faster than the one from apkmirror.

I think the app downloaded the right one and installed in background.