Hi! Before I agree to have an engineer come out and end up having to pay out can someone confirm for me that the seal has detached from the drum of the washing machine. My partner and I can't agree.

Today I did a normal wash load, not particularly big as we are drying inside. When I opened the washing machine I noticed lots of small grey plastic bits around the seal, I thought maybe I'd put something through the wash but the more I looked I thought that the rough seam round the seal wasn't something normal? So I think that the seal has detached from the drum, my partner however thinks something has got stuck between the seal and drum (in a gap that's always been there he thinks) and rubbed it causing the little bits of plastic.

Who's right? And does it need an engineer to fix or not? 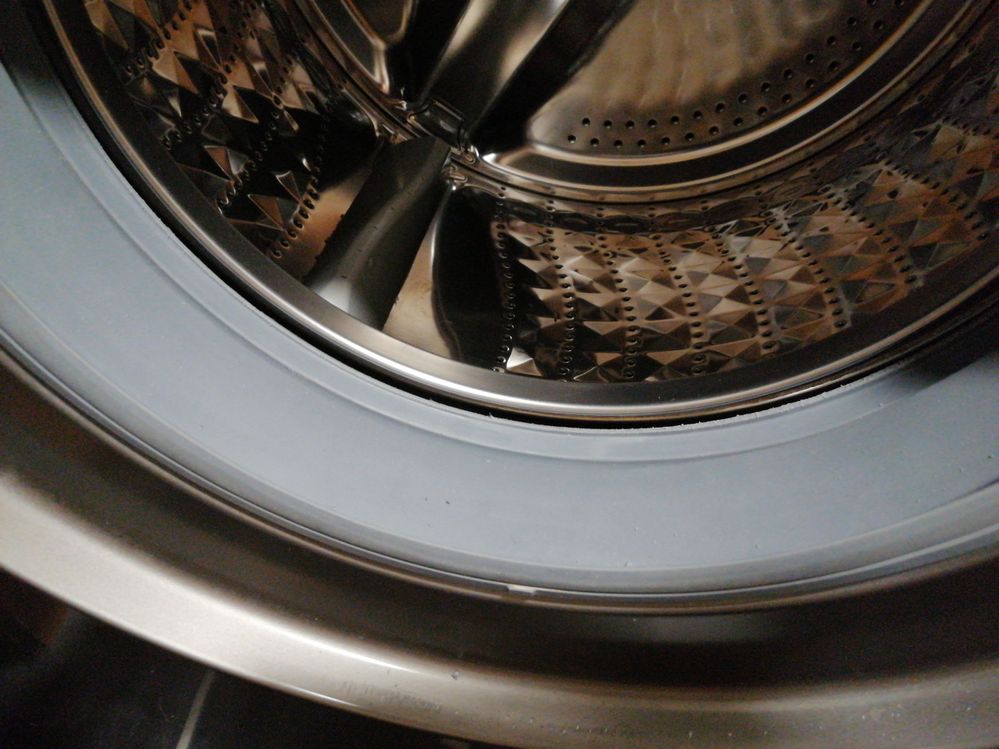 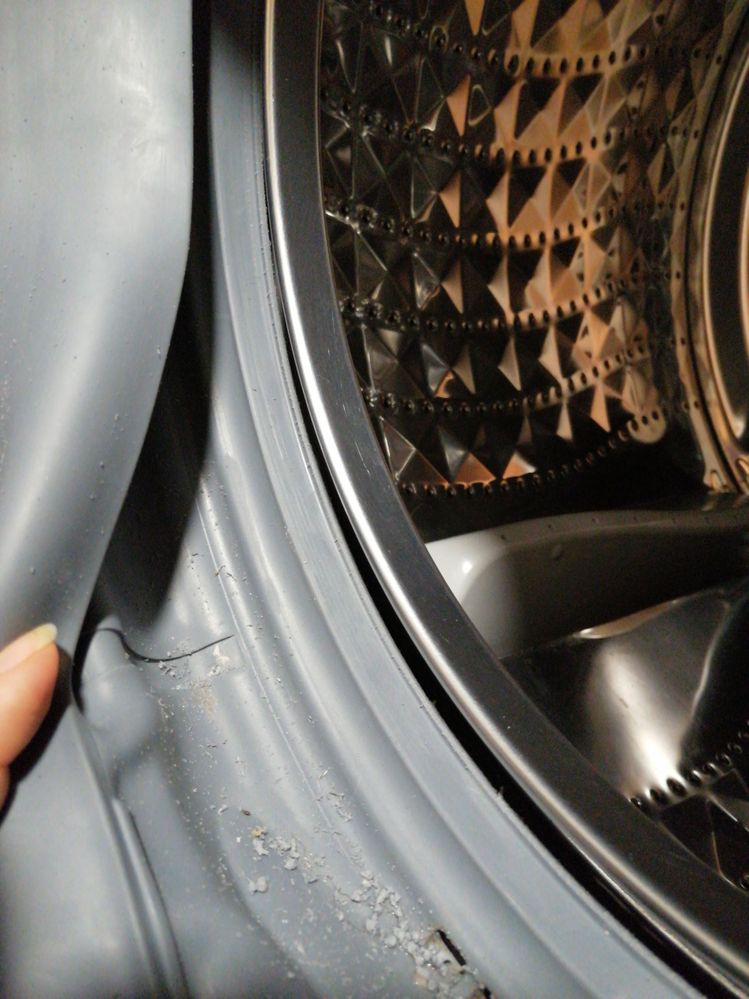 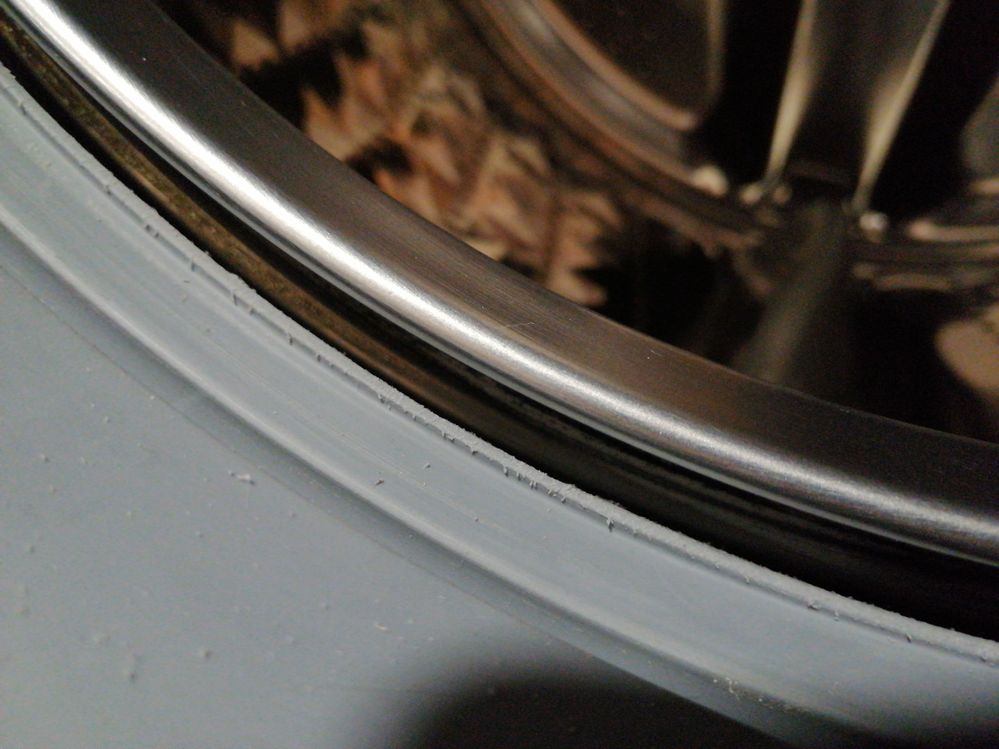 Hey @AliceG16! Best thing to do here is to get in touch with the Samsung Home Appliance team. A specialist will be happy to assist you with this and to guide you through the next steps: 0333 000 0333.

I am having exactly the same issue. I rang the support line and got no support! I have to wait for an email.

How Did this work out in the end, I have the same issue. Is it normal or did they replace

I have exactly the same issue. Is this worth the repair cost or would it be cheaper to buy a new machine?

I've had an absolutely catastrophic rubber seal issue.  I was washing 2 small cushion pads at the time so nothing  out of the ordinary and definitely not overloaded.

Before this I occasionally found a sock stuck at the bottom of the seal at the end of the wash, and maybe the end of an arm of a top. These seemed like minor inconveniences. Just a bit of unexpected sopping wet washing, I thought. Until now.

My machine is 11 months old and Samsung are saying that the rubber seal is not covered by the warranty.

The rubber seal is much wider than I've seen on any previous washing machines. My theory is that this is a design flaw.

The wide rubber seal allows clothing to fall in during the wash. If it is the end of an arm or leg, in the spin cycle the trapped clothing gets dragged around the inside of the rubber seal, creating abrasive damage. So that's the little pieces of rubber you're seeing.

In my case, going by the damage to my cushion pad, it was the corner that got caught, and because this was stiff piping material, it just ripped the seal to shreds.

As I mentioned, Samsung are trying to shirk their legal responsibilities under the Consumer Rights Act 2015 and make me pay for the repair.

However, I thought I'd start looking around to see if this was a bigger problem than just my machine.

I would be useful to know how old your machine is, and whether you have been finding socks or other items trapped in the rubber seal at the end of the wash. 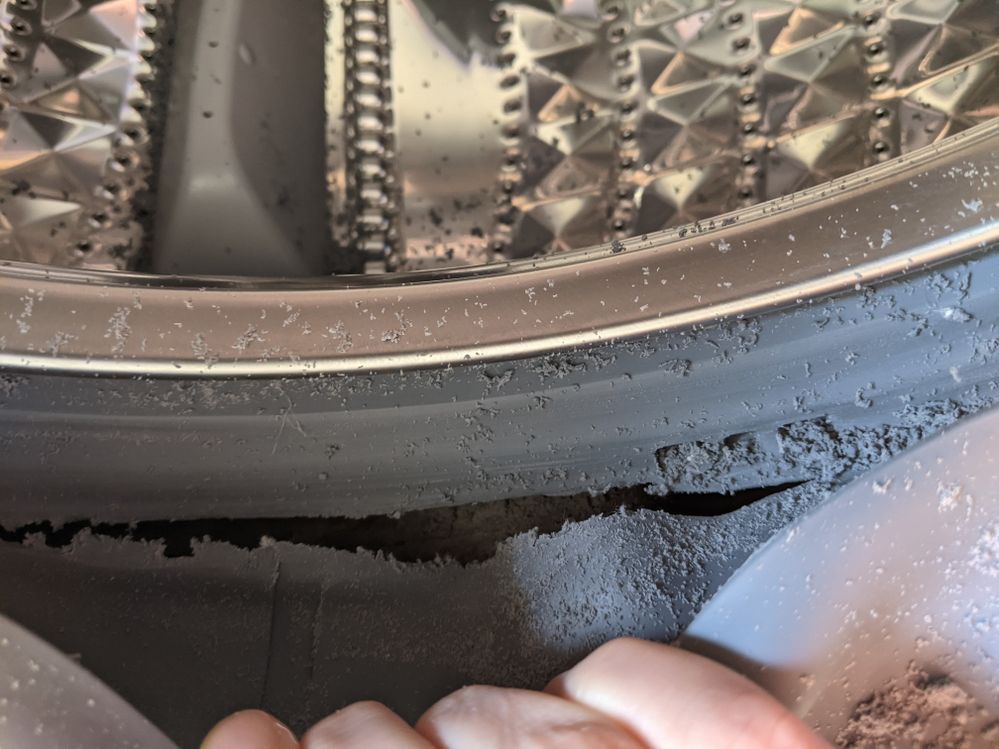 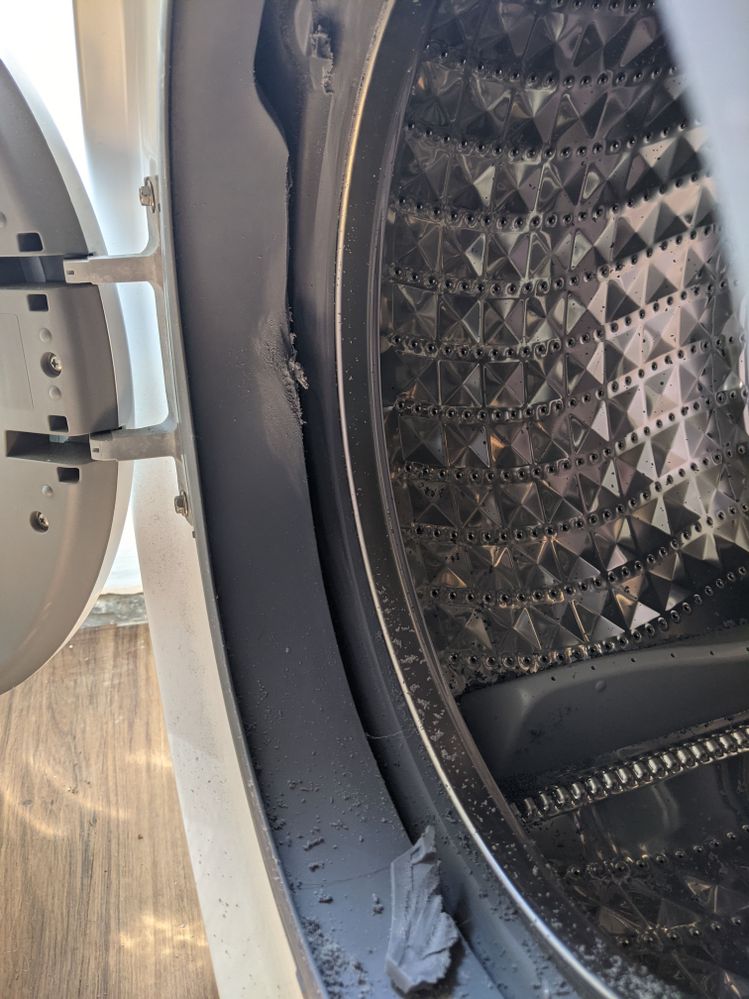 Home Appliances
Hi guys, this happened roughly 15 months after we had bought the appliance. We were still covered by warranty and they sent an engineer to replace the seal. I didn't pay anything and haven't had the same problem in the time since. I was definitely wrong in the sense there is a gap between the seal and the drum as standard. But the seal was damaged, that was evident by the plastic that was in the seal. I do still get the occasional sock in this gap. I don't know if that's of any use to you guys, sorey for the delay in replies!
1 Like
Share
Reply

Hi Alice, yes that's useful, thanks so much for responding.

Hi. We've just had the same issue. Found lots of grey rubber in the wash yesterday. Just thought it was something that was from a pocket etc. Today, the machine was making an awful banging sound. Looked when the wash had finished and found the seal had massively worn away, the drum loose, and massive gaps between the drum and seal.

We've had it 2 years so out of warranty. Anyone know the repair costs?

Also, as LynneK says, from day one it has always caught the odd socks or kids pants on the door seal.  Every wash! Surely that is a design fault and can only have contributed to the fault over time?

I'm sorry to hear you've had the same problem. After a lot of fighting, I did get my repair done via warranty. But while having my arguments the repairer Samsung use in northwest England, quoted around £130 for the repair.

The process of repairing looked reasonably simple, the repairer was in the property for about 20 minutes and some of that was doing his paperwork on a tablet. if this happened again out of warranty I'd try to fix myself. The internet price of a seal looks like £20-40. So depends how handy / brave you're feeling.

Do you have any idea what got caught? The corner of one of the cushion pads I washed was really chewed up so I think that's the bit that got caught. But it made me think that jeans, for example have very stiff seams so a leg-end could easily do the same thing.