So after watching the Un-Packed Samsung Event and the numerous YouTube Un-Boxings , reviews and some actual hands on in a Highstreet Store I decided to pull the trigger and purchase the Samsung Z Fold³ direct from Samsung UK, to replace my Samsung Note 20 Ultra.

Samsung Aramid Case purchased at half price due to ordering at the same time as the phone.

The phone is solidly made and certainly shows the quality of workmanship and quality of materials it's made from.

The outer screen is narrower than I'm used to and so took a little bit of time to adjust to especially as I've been used to using a Note,  but after a day or so I adjusted.

You can tell it has a 120hz refresh rate which is welcomed. I know some have expressed that the keyboard is a little cramped and it is, but I personally have no issues typing on it , and i can rotate the phone to landscape and i can then use the split keyboard. Swipe can be used or another downloadable keyboard if needed.

Apart from that the outer screen has all the functions and features of other Samsung phone's. It also comes pre fitted with a Tpu factory fitted screen protector which is of good quality.

Then we get to the inner screen and just wow  !

Again it has a 120hz refresh rate which certainly shows.

Yes there's a crease but after all it is a Folding phone, but after a short while I found myself looking past that. The natural viewing angle when using the phone is head on which makes the crease hide itself. It's only when you unnaturally look at the phone at an angle can you then notice it so it's not a dealbreaker for me.

Again it has a good quality screen protector fitted which does feel more like Glass than plastic.

The split screen capabilities of launching and using x3 apps on the screen is unsurpassed.  It just doesn't feel cramped and very usable. Being able to pin your favourite apps on the side brings a whole new experience when using the phone.

The multi tasking is the same with the phone using the Ram very effectively and optimisation via the Qualcomm SnapDragon 888 soc showing its power.

Battery stats are subjective as we all use our phone's differently but to press with my personal usage I'm still left with approximately 40% to 50% left when I return home. I power up at 5am and power down at 9pm. I do not game and as I work through the day I'm not on it frequently apart from my lunch break. Take from that what you wish.

The 4400mAh battery appears enough for my usage. I leave both screens on 120hz refresh rate,  use dark Mode and put certain apps to sleep and deep sleep mode. Apart from that I prefer not to disable functions and features I may make use of.

I would have preffered the sim card slot to be in the main body of the phone as it's actually in the fold part which means if you have a case on with a front frame which invariably have a thin piece of sticky adhesive on them then if your wanting to change sims ,or add another as it's a dual sim phone your left needing to pry off the front frame. I may have to buy some scotch double sided tape to eventually replace the original sticky strip.

Although Samsung have reduced the weight of the Fold³ from its predecessor the Fold² it's still a weighty device, but after using a Note 20 which in itself is pretty weighty I actually like the weight of this.

The phone kind of snaps shut which shows the quality of the hinge. The phone can be opened up at various points of angle and isn't loose , i.e it's not floppy if you get what I mean.

I'm no David Bailey with picture taking but the Fold³ takes nice shots and probably even better ones if I delved into pro mode and the various other camera options,  however I'm a point and click type of picture taker !

The face recognition is flawless in my expexperience.

I'm hoping in the near future Samsung build a silo into the Fold series for the sPen. Right now I'm carrying the one I recieved for free in the Samsung Starter pack in the detachable silo from the included Samsung Leather case.

The SPen works like a charm on the main inner screen and hopefully on the next versions they'll make the outer screen sPen friendly too.

Phone calls, text messaging and connection to signal is as it should be.

I've had no issues connecting to 3G, 4G, 4G+ are good , however as my tariff does not include 5G I can't comment on that type of connection.

Samsung Pay works as it should but as I do not use Samsung Pay I can't comment on that.  I'm aware of some owners experiencing issues with getting Samsung Pay to work.

The phone came with Android 11 with Samsung One Ui 3.1.1 and the July Security update on it to which I hope we see further updates soon. 🤞

Samsung have made the Fold³ less expensive but even so it's still a very expensive phone.

Like others have said the downside to a Fold and the delights it brings may bring about not wanting to go back to a traditional shaped phone now !

The Aramid Case is a quality case which gives some good protection,  feels soft to the touch and is very minamilist which is the type of case I tend to go for.

Still early days so I'll add to this as I get to use the phone more. 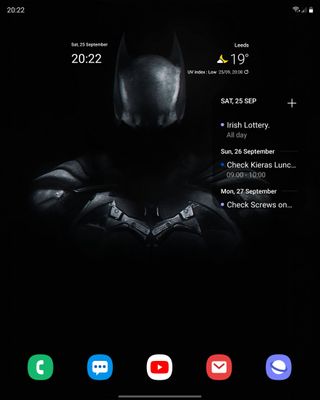 Update after 20 days of usage.

The Fold³ has now learned my usage pattern and the battery has optimised.

Now bearing in mind we all use our phone's differently so usage time's  /  screen on time's will invariably differ I am getting x 2 days usage out of the phone.

I power on at 5am and power down at 9pm.

I do not game and my Fold³ is in Dark Mode with dark wallpapers and various apps in Sleep and Deep Sleep as that's my personal preference.

I work through the day so I typically check incoming emails and texts and use the phone to view Social Media and watch YouTube along with replying to people on my hour lunch break.

I then use it at home again in the same way as above.

I use Spotify while commuting to and from work and my Samsung Gear s³ Frontier Watch is connected to the Fold³ via Bluetooth.

I've now adjusted to the weight of the Fold³ and basically look past the crease. When your looking at the inner screen head on as you would naturally the crease kind of blends in and you don't see it.

The multitasking and using split screen with having x3 apps open on the inner screen is where this phone  / phablet / tablet is where it comes alive and shows its true power.

The outer screen size allows me much better one handed usage and works just as any other phone and when I'm say sending a text message I can rotate the phone into landscape and I'm then presented with a Split keyboard that makes typing easier than in portrait mode.

The fingerprint scanner located on the power button on the side of the phone is 100% accurate.

I would have liked the sim card tray on the main body of the phone and not on the Fold side as this isn't really convenient if you have a case on that has the frame part separately and it's stuck on with an adhesive strip and you then want to swap out your sim.

I've had no issues with network connection or data connection and achieve 4G+. I don't have a 5G tariff yet so can't comment on that still.

I've had no screen issues on the inner or outer screen.