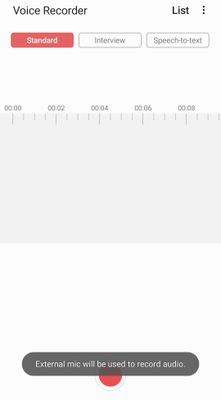 Sir, did you get the solution, and if yes what was the solutions as I am also suffering from the same problem.

Sir, did you get the solution, and if yes what was the solutions as I am also suffering from the same problem. Please

Hi, the mic issue seems to have solved itself.  I don't know how that happened, but I haven't actively done anything to solve it. Maybe, one of the many software updates got rid of the issue.

While, unfortunately, the keyboard thing is still there. It's like it's permanently printed in the background. My mum has an S9 Plus as well and she has the same keyboard issue but hers is a lot worse. In the past she had another phone from the Galaxy S line and this keyboard thing happened with that phone too.

I don't know what to think at this point...maybe with time these phone just do this and there's no way to solve it, apart from upgrading to a new phone...and by the way, I used to have a phone from the Note line before having an S9 Plus and it was so much better and easier to use too. I'm a bit sad this year (and maybe forever) we won't have other Notes. I wanted to upgrade to a Note, but now I can't.

Anyway, I'll try contacting Samsung's technical support and see if they have an answer. If the tell me anything useful, I promise I'll report back to you.

Have a good day.

You said you will be going to the service center did you? If yes, what was the solution to the problem?

the mic issue and letters being stuck in caps lock might have been a software issue. In fact, a few months after I've had this problem, I installed a software update (the automatic ones that your phone asks you to install) and that solved everything.

However, I still have a problem with seeing the shadow of the keyboard at all times, as if it is printed on the screen.

They told me that there are two options:

-software issue: a couple of days ago they gave me a solution to try (after I try it, I'll let you know how that goes);

-hardware issue: the pixels in those places are "burnt"...and well, this has no solution. It happens with the smartphone aging, basically. Most people that saw my phone think this is the case.

Have a good day.

Hi,
But my problems haven't solved so I request you to tell me if there is any solution to this problem.
Thank You