Galaxy S9 Series
Hey, so after i got the april 2021 update, my battery went from needing charged nearly every couple days with light use (no video/music streaming, some in app vid watching i.e reddit), to it'd run out overnight from a full charge to zero, as you can see.

The main culprit was always google play services, and no matter what i tried, nothing helped. Sometimes it'd seem to have sorted itself, but then go back to insane battery drain-

It's practically always google play services thats the culprit.
Now, since the start of June, my phones telling me to update again. The notes mention nothing about a battery drain fix or google play services sorting anything. I dunno how much worse it can get, but i'm apprehensive, and haven't allowed the update.
Has anyone had the same problem, but had it resolved by the june update?
I'm in the UK.
Thanks
1 Like
Share
Reply
5 REPLIES 5

Galaxy S9 Series
Hi try this fix for the Google play services battery drain, it worked for me.

May also wish to look at this article for solutions to Battery Drain with Google Play https://www.maketecheasier.com/fix-google-play-services-battery-drain-android/

Galaxy S9 Series
Not got June update try but apparently it's better. 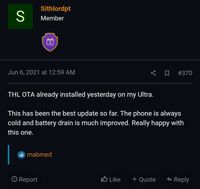 Galaxy S9 Series
Apparently A wipe cache can do wonders after an update.

Also under permissions check and update what has location access all the time vs only when app is open and denied.
Choose wisely depending on your needs.
0 Likes
Share
Reply

Thanks for the advice.

Turns out the june update did fix the battery drain issue!