Galaxy S21 Series
A hill(technically a Marilyn) about 25 miles North of me as the crow flies, known as Meikle Bin in the Campsie Fells in Central Scotland; its about 1,870 ft high.

The foreground factory roofs are about 400 metres from me.
Took with the normal camera at about 80% zoom.
Hills like this were known as 'Beacon points' in ancient times, high vantage points visible for tens of miles around where fires would be lit to warn the country of impending attacks.
Theoretically you could send such a signal from the Scottish Borders to the Highlands(200 miles approximately) in less than a minute via speed of light signalling, given the topography of the country.
I'm on top of the Clyde Valley at the other end of what is a large basin overlooking Glasgow, a basin that was likely carved out by a glacier thousands of years ago, though it does also resemble a meteorite impact crater; its downhill all the way from here to Glasgow some 16 miles away.
I can also see another hill, Tinto, in the opposite direction 20 miles to the South, and the mountain Ben Lomond(which overlooks Loch Lomond) 40 miles to my North West on a clear day; hoping to get a pic of it when the weather permits.
3 Likes
Share
Reply
5 REPLIES 5

Galaxy S21 Series
Thanks, it's a landmark I've known since childhood, fuel for the imagination growing up.
0 Likes
Share
Reply

Galaxy S21 Series
Nice, you've got that type of scenery on your doorstep then 😎
0 Likes
Share
Reply 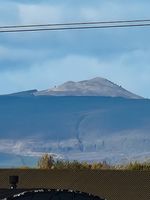