S21 Ultra performance after camera use

So I noticed something strange.

We all know the camera on the Exynos version causes a significant load on the CPU. 10 minutes use of the camera (esp. using 108mp and portrait modes) had my device at 44-45o. I then closed the camera app and waited around 5 minutes but the CPU kept at ~41o with spikes of heavy use even with the camera app being closed for a while.

I then ran 3Dmark where I would usually get 5300 and it scored 3300. Another run after a couple more minutes acheived about the same result. This means that the workload the camera puts on the CPU throttles it so much that it is kept throttled for a very long duration of time. Probably even after the CPU cools down.

Extremely strange and frustrating.
I wonder if there's a way to bypass the CPU throttling.

Galaxy S21 Series
a patch is on the way to deal with this issue. should be in the uk shortly i hope. i haven't had the heating issue at all.
1 Like
Share
Reply 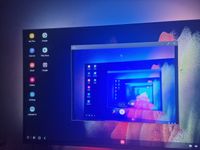 Interesting.  Could you please let me know how hot your CPU gets after 10 minutes or so of camera use (heavy modes - 108mp and portrait)? Also, if you have 3DMark, can you run it immediately after using the camera?

Thanks. Can you please let me know how hot your CPU gets after heavy use of the camera (10 minutes, 108mp and portrait modes)?

Galaxy S21 Series
it didn't. i used it or twenty minutes in the garden earlier amongst other features and it wasn't hot at all. everything works as it should.
0 Likes
Share
Reply

Galaxy S21 Series
I had same problem over heating ..fry a egg on it hot ..I gave it 5 days to sort out with updates nothing changed for £1329 I said no way and sent back for full refund from Samsung ( UK) never seen anything like it before ..thought it would melt it got that hot ...using camera made it worse ....I've gone back using my S10 5G never gets warm and no problems on that one ... shame on Samsung and with how hot it was getting it must of damaged the inside battery etc was not going to take a chance on it....like I said before I've had all makes of phone and never ever seen a phone get that hot before... not just once but every time I used it
I hear people say wait let it do its thing etc but
I thought for a phone costing £1329 do I take that chance... no way was I
1 Like
Share
Reply

I see. Would be interesting to see what the actual CPU temperature is. More interesting is the 1st unit I got was extremely hot when using the camera. This second one is just mildly hot but enough to impact the performance of the phone in demanding situations (gaming). Also - is your camera laggy (not all physical movements translate immediately to the screen)?