For all the users suffering battery life issues on S21u... please read on.

Of course there are lots of bugs floating around these new released Phones and this is just one of them.

To explain my experiences... I have thankfully not had any significant heat issues... but I have experienced a few 'warming' episodes... and I have obviously been lucky compared to some users.
Other than the odd camera image that needed retaking... and the battery life issue hasn't been that great... but I have been very happy overall with my ultra.
However, until today, the best battery life I experienced ... was about 5 hours of screen on time... with the phone left at the end of the day with perhaps 15 to 20 percent. For the intensive usage days over the weekend, I had to charge again by the evening to give it a boost or it would not have lasted even a day.
I received the new February update AUB3 on Monday... installed it... and it seemed my battery had got worse Tuesday I only have 3.5 hours screen time and had about 25% left.
if this sounds familiar then please read on. This is where it gets interesting...
So I did a bit of research and read an article online about the importance of the brand new phone being prepared correctly. It mentioned the possible incompatibilities between the new Android 11, OneUI3.1 and the new hardware. The advice it gave was to ensure the phone did NOT have a full phone sync to start... between an old and new phone. It mentioned that many apps have issues with Android 11 and contribute to battery problems as they do not work correctly with the new OS.
After chatting with a few people here last night... I performed a factory reset back to the new phone status. Rather than using smartswitch to sync the previous contacts, messages, and applications from my S10+... I started from scratch... with a clean install.
Before I factory reset, I wrote a list of apps that were essential to install... banking... music apps... TV apps... Office apps. I decided things like easyjet, Tui, TripAdvisor, old games and other low priority apps will not be re-installed. They can always be added back later...
It took me all evening. After the factory reset, from the first reboot and use... the phone behaved differently without syncing all my apps. It went through its setup in android 11 differently from my first attempt on 28th Jan when I synced everything.
I installed many of the apps again, but this time directly from the store each time... and surprisingly many things like Netflix and other many apps were showing a slightly different version from previous... a newer user interface and looked better optimised for Android 11.
Since my factory reset, the phone has been quicker to respond... no heat warming issues whatsoever... and the apps have installed without any problems.
Today...day 1... the battery is learning again for a couple of days. However bearing in mind for 11 days previous, the maximum SOT I have had from this phone is about 5 hours total, this screenshot below is today's performance.
It has been used today since about 7.30am... not heavily, but more than 5 hours SOT, plenty of things such as a Netflix show watched, NowTV... music playing for a couple hours... lots of Internet browsing etc.
13hr46... more than 5 hours SOT...and my battery is still at 46%. It is going through its learning and I haven't changed any settings to back them off from WQHD+, 120Hz or changed anything.
I am truly amazed. I would highly recommend that everyone with battery issues at least tries a very clean factory reset... literally start from scratch except for essential such as contacts and calendar which can be synced from Google. I know it is a pain. That was my biggest dilemma... and losing a load of stuff.
But it has 110% been worth the effort.
The worst that will happen... is that you spend the evening re-imaging the phone... have a spring clean of your apps ...and it doesn't do much in your case.
However, the best that will happen is you will improve the performance considerably... you may get 8 to 10 hours SOT and that battery life that you expected from the start.
I think it is worth 3 or 4 hours of anyone's time. !! Those that give this a try and see a significant improvement ... you can thank me later 😃 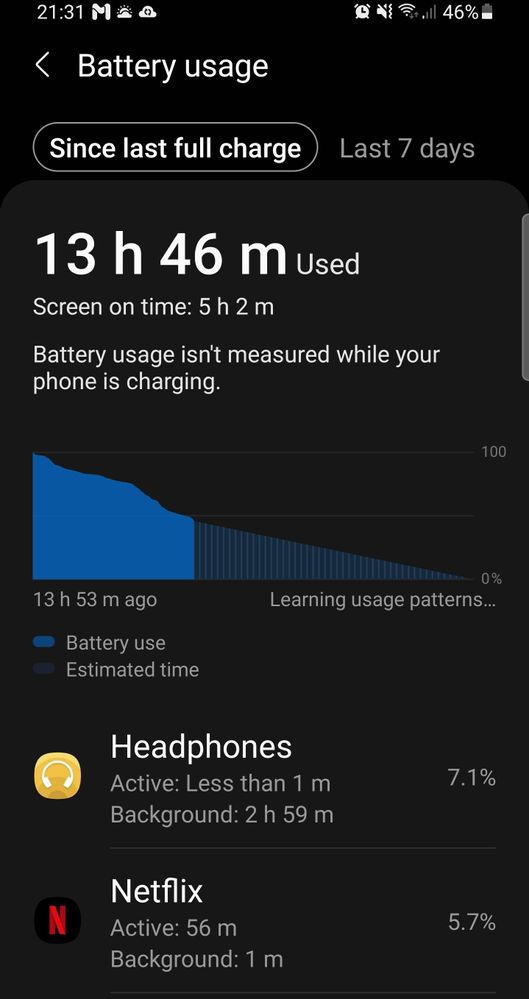 Galaxy S21 Series
I also heard a number of years ago that a new smartphone will use more battery in the 1st few weeks after you get it, then in the following few weeks battery life will start improve.
The experts talking about this explained that a new smartphone is "learning" your habits & uses, including the time of day you use it & also whether you use it once for 5 hours, or 10 times for 30 mins each.
I'm no expert so I don't know how true that is, but in the case of my last phone the battery use in 1st month was a little high, but it improved greatly over the coming months.
0 Likes
Share
Reply

I am waiting the replacement device and I will try to install everything  from scratch.

What about the camera issue? I was getting significantly high noise in every different modes.

The phones do actually state learning until about day 3 or 4, and then i suspect use some of your habits to optimise the phone.  I am not sure if you usage can influence the battery optimisation but your hunch is true...  and it will be expected to improve after optimising is completed.

However i did find like i mentioned earlier... i was getting 5 hours tops for SOT... although i could see other users posting here about 8 to 10 hours SOT easily per day... and kept wondering why my phone was considerably worse.   Hence my compulsion to start trawling the internet for answers.  There are also many good advisors on here about these things such as @ironass  and after some discussions yesterday I decided to put the time into trying this method.  I think the results have been rewarding...

I havent really put the camera to test since AUB3 or my factory reset.   However whilst i expect this may greatly improve battery life, I suspect optimisations for images will need some further software improvements.

Or if the question is the overheating camera issue, I did not experience this in the first place, but I do think it is worth the time in factory reset for others.

Galaxy S21 Series
Oh you're absolutely 💯 correct to do what you did & I'm glad you got an improvement-not just with battery performance but also with the different versions of the Apps as you mentioned.
Although, so far fortunately for myself (fingers crossed) I haven't had any issues with the battery. 🤞🤞🤞🤞
0 Likes
Share
Reply

Just to add some further improvements, I have run a stress test on 3D mark 3 times in total during recent days.

The first time I ran the 3D mark stress test was during the first release of software AUB2 (Jan), and i got reasonable results. It started the test with scores around high 4000s and ended up about 3500 for the last 10 or 12 loops.

The second time I tested was to benchmark the stress of the AUB3 update (Feb). I found the results were very similar to those in the first attempt. Typically after the device had warmed up, the scores were around 3500.

This test below is the third test I have done, and run just a few minutes ago, with the same software AUB3, and with a factory clean install.

The phone still warms up to 43C which was the same as the previous tests, and at this temperature the phone is getting 'very warm'... but this is a stress test to is expected to get warm. The photo shots below, contain the data from this test.

Again a big win for a clean install at the moment.   I may be getting ahead of myself a little, and there is clearly a few more days required to fully understand the improvements that I have seen, but I am very optimistic of the better running of the phone.

p.s. I am a 48 year old technical engineer in the space industry... i spend all my working life analysing data...finding improvements... trying to find reasons for problems and solutions to those problems. 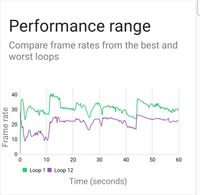 Thanks for that ,  could you also share the link to article you read on the incompatibilities  between the new Android 11, OneUI3.1