Galaxy S21 Series
Hi all,
I'm looking at getting a gimbal, DJI seems to be a good choice but does anyone have any experience of any specifically with the S21 ultra?
Curious to know if the extra motor strength of the OM4 is required Vs the 3 for this phone.
Equally the moza gets decent reviews so also interested in this.
Thanks in advance!
#dji #gimbal #s21ultra #filmmaking #creator #osmo #om4 #moza #minimx #mobilegimbal
1 Like
Share
Reply
7 REPLIES 7

Galaxy S21 Series
I'm using the DJI 3 with S21 Ultra in a case. I've had no problems.
However the "Mimo" app software doesn't seem to work with the camera correctly. it just works well as a gimble. Not problem if you want to use the main camera anyway.
I've not tested image stability against the inbuilt video stabilisation yet. might not need a gimble depending on how you are using your phone.
0 Likes
Share
Reply

Galaxy S21 Series
thanks. definitely interested to know if the DJI 3 motors are strong enough for this phone.

I read the DJI 4 works somewhat but doesn't support the zoom cameras, which is a major downer. The reviewer said DJI's response to if it would was "buy an iPhone, if that's true or not I don't know.

Galaxy S21 Series
I've just been swinging the DJI3 thing round a bit and had no problems
I've been using with S9Plus previously, that was fine. the S21U is a bit longer and heavier obviously but doesn't appear to be a problem for it. I've been using it on a tripod for zoom meetings an hour or more, and it's kept its balance.
As mentioned above, I think the software is designed for iclones, and android as an afterthought. The zoom control on the device doesn't work but the joystick does. The auto track works well if you are on your own for selfie video. I use the software to calibrate the device and change speed of reaction to tilt etc, then use Samsung's own camera to take video. (the camera zoom button on dji is useless)
Charging phone whilst using from the gimble doesn't work as it unbalances it.
I bought new last year for £100, but disappointed with the app.
If you can find one on ebay really cheap and prepared to work with its problems, then its an amazing bit of kit as a straight forward gimble. You can run and jump pan slowly etc and the mobile just floats in the air.
I'm keeping mine as it fulfills my needs.
If I was buying again, I would look for one that works better with android.
1 Like
Share
Reply

Galaxy S21 Series
thank you..yes read about some android issues, I was also looking for 2nd hand eBay ones but unsure of weight limit.

thanks again, I'll keep an eye out for a bargain (although Amazon seems to have warehouse deals on them fairly regularly)
1 Like
Share
Reply

Galaxy S21 Series
As an update, despite being set in the OM4, I've managed to snag a Moza Mini MX for under £40 from an Amazon warehouse deal...so will give it a go.
0 Likes
Share
Reply 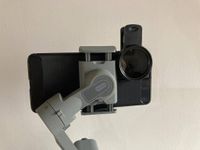 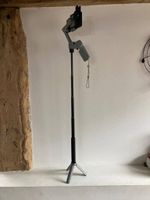 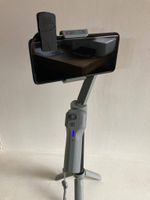 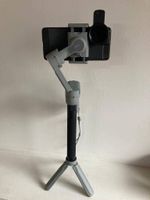