I'm having new issues with Samsung's Gallery Sync to OneDrive! Previously on this forum people have described how photos and videos are not synced to OneDrive immediately (unlike others like Dropbox), and requires a manual sync.

Now the WhatsApp media folders don't appear in 'Albums to sync' in Gallery's settings. They were there before, and WhatsApp is still set to show media in Gallery. WhatsApp photos and videos appear in Gallery, there's just no option to sync their folders. Currently I only have 'Camera' and 'Screenshots' as options.

This happened after using Gallery's 'Free up phone space' feature. This clears all folders from 'Albums to sync', and then as photos and videos appear in Gallery again, new folder options to sync appear. Just not happening with WhatsApp now though. Anyone else having this issue? I'm using a Samsung Galaxy S20 FE phone with latest software, Android 11, One UI 3.1, and Gallery version 12.1.09.0.

Anyone else experiencing this issue?

Backing up to OneDrive may be redundant but syncing to OneDrive is far from being redundant if you want to sync all your media to your cloud to have access from your PC.

However, Camera Uploads has a new feature to organize recent uploads by source and date. Since you probably linked the Samsung Phone Gallery with OneDrive, the Gallery Sync feature has replaced the Camera Uploads feature.

Let me tell you the difference between the camera uploads and gallery sync.

Camera uploads: The camera roll on your device is only uploaded to Microsoft OneDrive - photos are not synced in both directions. That means you can delete uploaded photos and videos from your device, and the copies in OneDrive will not be affected.

Warning: Deleting files synced to Samsung Gallery will move them to the Recycle Bin and remove them from all your synced devices.

To prevent the Samsung Gallery app from syncing photos with OneDrive and remove the Samsung data sharing permissions to your Microsoft account, you need to edit how to sign in to Microsoft:

• Open the OneDrive app and tap Me.
• Tap Settings.
• Tap Camera Uploads and then tap "Organize by Source". 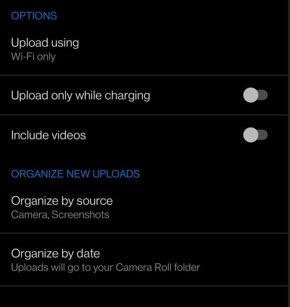 • Now select the folders for which you need to organize your new uploads. 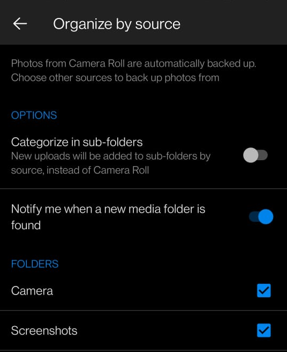 Feel free to let me know if this has worked for you. It has for me, so I don't think you will be running into any problems.

Is there any solution for this as I have the same issue...

Same issue with a Galaxy S22.

For sure is what some of you said, that the gallery app doesn't search for media in the current whatsapp media directory...

The integration of the gallery  with OneDrive is perfect for me, much better that the backup with OneDrive directly. Please Samsung, update your app to solve this!

I concur. I switched off Gallery to OneDrive sync and back to uploading photos to OneDrive directly on my Note10+5G last year because the app would stop syncing unpredictably.

I'm shortly to receive the S22U and was checking here to see if it was still an issue after all this time. It apparently is, so I won't be turning that option on again until it's resolved. Pity, because the feature is very useful.

I have the same problem, when I try to select Whatsapp album, it doesn't apper on available options,

Wait for 2 minutes and Media folders will be visible in Microsoft Onedrive settings.

Looks liker OneDrive may be fixed.  I am now able to select Whatsapp folders.