Interested to know if anyone has had an S20 Ultra and then found the camera screen at the back either cracked or with a 'bullet hole' just appear despite having not dropped the phone or hit anything?

I have had this and obviously been on lockdown so not subjected the phone to anything like normal day to day rigours. Samsung denied any issues but a quick Google search showed up what I think is clearly an issue !  As I expected (but hoped I would be wrong) Samsung were not interested in listening or checking reports, I was just told it was not covered by warranty and therefore I'd need to pay to sort it out myself. I'd had the phone 5 weeks and spent £1200 on it ! My S8+ has been dropped and thrown about outside when fallen from pocket, not a single issue with it and using it now while S20 Ultra sitting here waiting for me to get it sorted. I have phone insurance so not bothered by that but I am bothered by Samsungs attitude and also worried about it happening again once I get it back ! Samsung will not get my business again, may sell it and get a Oneplus 8 pro 👍

I had my S20 ultra crack in the same way twice. First time was just 1 month from new, always in case never dropped....one day saw a bullet hole in rear camera. Complained to Samsung but they wanted to charge me for the replacement. I complained and Samsung agreed to replace it under warranty. I got the phone back and 5 days later, another bullet hole appeared. I sent back again and complained again. They replaced again. After this time, I googled and searched fir resolutions. In the end i decided it was a design flaw and bought a rear screen metal protector. Since then no more bullet holes and phone working good. You have to insist and show them all these msgs and other incidents, then Samsung would replace under warranty.

HI, you will get more then one, I am in! 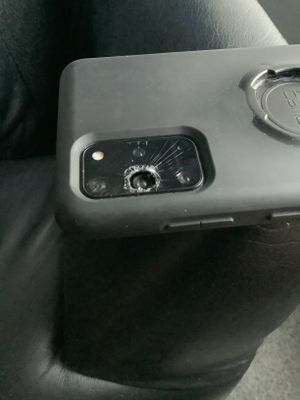 so this has just happened to me and was exactly as others described, all good one day and then just appeared the next despite just bring around the house. Are Samsung being responsive to this as an issue now?

Looks like that could be a picture of my phone you've posted, bullet hole in exactly the same place, one minute this morning all ok then the next a hole. Not heard of this problem until today and now it appears it's widespread, even with a class action going on in the USA. Did you get anywhere with Samsung?