"Phone Locked - This phone has been lost" - error message

Twice in about a week now, I've woken up to a message saying:

This phone has been lost"

Last week (first time), I went onto samsung find my phone and logged in and unlocked

this morning, I tried the same thing but my phone is not listed! I checked google find my device, but there's no option to unlock the phone. I can use whatsapp web (really weird!) and i can't power off my phone - it says: this phone has been locked by find my phone

I've tried the holding down volume button and powering off the phone at the same time, but it just takes me back to the this phone is locked screen

I have contacted my provider EE who said the phone (IMEI) is not blocked, it's an issue with Samsung.

I have called Samsung multiple times yesterday. When I went to the store in Kings Cross, London, the guy had a quick look. He said the phone has been reported as lost. He said contact the accounts team to unlock it. He gave me a number, I called it, they said they were from the 'find my mobile team' and then passed me through to a tech team. The tech team said they can't resolve it and want a technician to look at it. The technician's visit might take up to 16 days as I can't get an appointment soon. I`m without a phone - and no solution, so annoyed!

Thank you for the quick reply. I can see my phone in google find my device.. but I don't know if that can or would help in terms of me locking the device or anything? This is the frstration. I can see it on google find my device but not samsung find my phone, it was on samsung find my phone last week! I`m unsure if someone is trying to hack my account - there should be logs/a trail of all the changes! 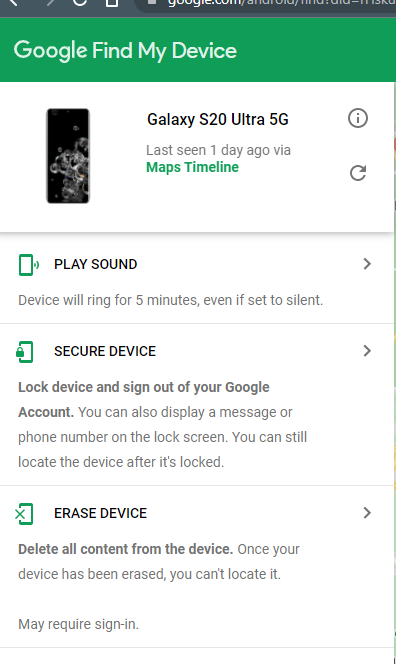 I hope by clicking secure device, no data is lost... unsure if this will help unlock the phone