Introducing the Samsung Galaxy S20: Change the Way You Experience the World

As announced at Unpacked 2020: the Samsung Galaxy S20! 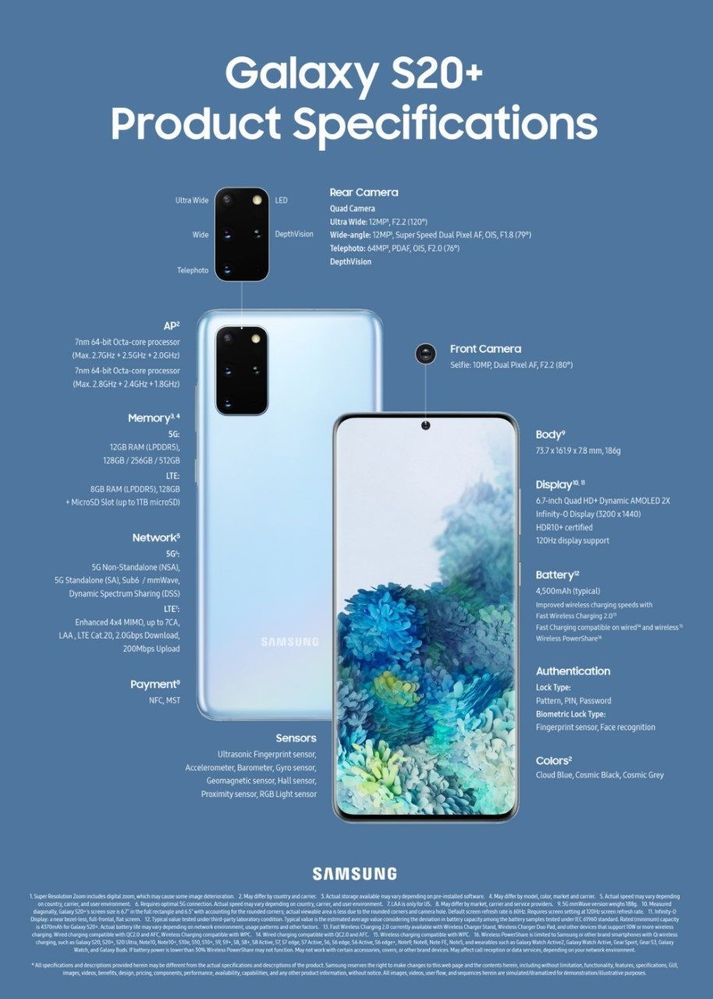 Figured I'd kick off with some Q&A type stuff.

LOL! Nah. After celebrating 10 years of Galaxy it’s now about reflecting a new decade for the Galaxy S series. And hey – it matches the year we’re in! Which is nice.

All three S20 devices support 5G; and are 5G Standalone ready - for hyperfast speeds and ultra-low latency. The future is 5G - and the S20 is fully equipped for it.

Is the camera any good?

Well, it’s got a lot of kit to take some awesome photos and videos with! Brace yourself!

Anything new about the display and  touchscreen?

Apart from being bigger and having more screen-to-body ratio than before, the S20 has a display with an amazing 120Hz refresh rate and enhanced 240Hz touch latency for incredibly smooth gaming.

All that 5G, camera and display must eat the battery so quickly, right?

All three devices come with 25W fast chargers, and the the S20 Ultra supports 45W Super Fast charging as well.

What about the memory?

The S20 series series starts at 128GB and goes up to 512GB of onboard storage. And if that’s not enough, all three devices support up to 1TB MicroSD.

As for RAM: 8GB; 12GB; 16GB - allowing you to run. say, 1, 3, or 5 designated apps in the background respectively without any compromise to performance.

For UK models, the S20 has a hybrid-SIM slot: either 2 Nano SIMs, or a Nano SIM and a micro-SD Card.

It also supports an eSIM, but this can only be used in conjunction with one Nano SIM.

Do any of them have a 3.5 audio jack, or are they all USB-C/Bluetooth?

None of the S20 series have a 3.5 audio jack, and they all support a USB-C/Bluetooth connection for connected audio devices instead.

There's a lot more that can be said, and I'd be interested in what you guys want to know. So ask away - and we'll add to this post!

Looks gorgeous, can't wait to see it in action!

Probably a silly question, since it isn't mentioned, do any of them have a 3.5 audio jack or all usb-C/bluetooth?

I'll be sticking with my S10 for now  but the S20 does look pretty awesome and for those  ready to upgrade the model may well be king!   Obviously though you need  first hand experience to be sold and early adopters will be able to share their experience, some users obviously may experience issues.    Rumours not always correct but feeling in some quarters was that Samsung would change the sequence and come up with the S20

Bigger may not always be better but this high tech and innovative model should be a pleasureable and impressive experience.  The AI and large image sensor looks great and it will be more efficient and faster.  With the improved battery estimates are an extra two hours battery life . The camera is definitely a step up with all the capabilities and now the opportunity to view 8k video.   Reports suggest images should be much improved and noticeable difference with low lighting conditions.

Obviously 5G is the next  big thing,  tech advisor say that you will be able to get the 4 version if desired in the standard model but not the others.    A few changes in the S20, wired Headphones not supported.   I do have wired headphones but mostly use Bluetooth as sure many do but that will be a miss for some.  The Bixby Button has also gone.

Not a silly question about the audio jack IMO. I've updated the first post.

Galaxy S20 Series
Thanks for the update @AntS appreciate the update

I am more leaning towards no at the moment.

I settled for the white colour in order to be able to get the 1TB model and now with the s20 ultra there is no option for the 1TB model. It is not so bad with the colour as I use a case and dont ever see the back of the phone. But it is a shame as it would feel like a downgrade going back to 512GB.

I wanted the black model (which only lets you get the 128GB capacity with that colour).

You get free buds at the moment (plus side)

I liked the front camera the way it is now with the wider camera instead of the small one in the middle of the phone.

The back looks good. I like the new camera look and specs of the phone. But I think I will wait and see with the ultra.

When Samsung say RGB Light Sensor, do they mean the little notifications LED with different colours on the front or something else?

ah, thanks for clarifying that AntS!