Prior to the Android 11 update, so up until around a week ago, everything was working fine in Facebook Messenger and I could send voice messages.

After the update however, when I press the mic symbol to record, no messenge is sent...

The small bubble with voice waves appears to show I am recording, but when I release the mic button nothing happens.

Note that Messenger has the permission to use the mic, I didn't make any changes there.

I tried uninstalling and re-installing both Facebook and Messenger; but no change...

Not sure what's going on here, especially since sending voice messages on other apps like WhatsApp works fine.

I'd be very grateful for some suggestions! Cheers!

In principle of course that's possible, but a quick search only yield complaints about the Messenger "chat bubbles"; nothing related to voice messages at all. Since it's a very normal feature, I was expecting at least a few other similar threads somewhere...

You're not alone my friend. Unfortunately, I have no solution, seems like a compatibility problem.

Ah many thanks for confirming this! I've sent a technical report in Messenger, but I doubt this will be high on their priority list, unless it's something affecting a wide range of Android phones. Hopefully an update will come along soon...

Hi, Just received my new S20 FE and having the same problem. Hopefully will be sorted soon.

I had a software update the other day and was hoping it would fix it, but no...

I'd assume someone from Samsung could/should look into this?

I used messenger lite it allows recording voice. But unfortunately lite doesn't have all features  so I keep both messenger &messenger lite 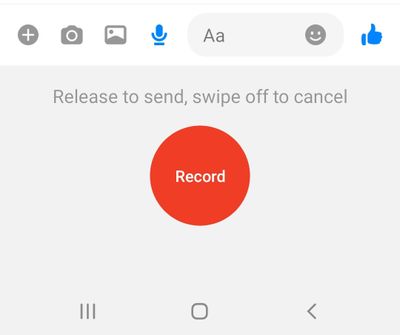