Samsung Galaxy Note 20 Ultra - Dispatched in the UK yet?

Any of you guys that pre ordered the note 20 ultra in the UK have it dispatched yet? My order still showing pre order. I have seen in the US peoples have been shipped and some already received. Just curious!

I have got thesame issue as you. Mine was due to be delivered yesterday but status has now changed to 'returned to Samsung'. Have you had an update?

I received an email from Samsung informing my order is shipped, another email from DPD informing delivery on 20 August. Not received it yet. Tracking status on DPD site says "Received order details but not parcel". Any pointers, please?

I've got the same problem as Yousaf99 and biggybountz.  Buds arrived on 19th and phone was due to be delivered same time. Update to DPD trackin saying 'Your parcel is on its way back to Samsung'.  Sales have no idea, Klarna says all is good with the finance so have no idea what is going on. No update for 2 days from sales so I'm stuck in limbo with no new phone.

Pre-order says that they will always dispatch on the pre-order shipping date. Guess that is not true!

I speak from experience, never, ever had a delivery made by something I shopped at Samsung delivered on time. I guess I am what you call unlucky! 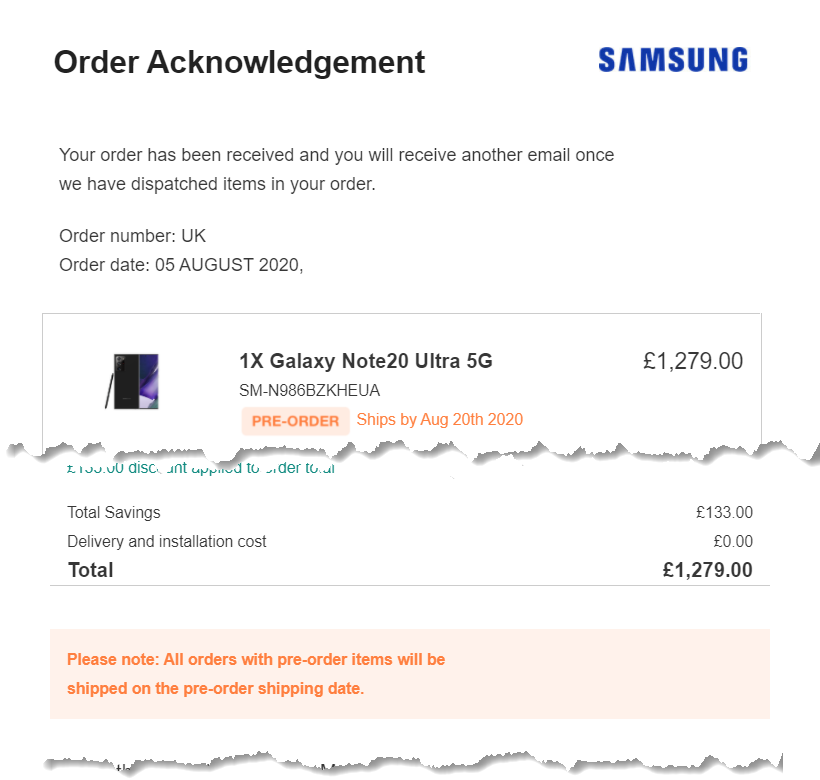 I pre-ordered my Note 20 Ultra on the 18th August and requested for delivery to be done on the 21st August before 10.30am. I received a email from Samsung on the 19th at 11;17pm saying it would be delivered on the 20th, which never actually did turn up. Then had a email on the 20th August at 2am saying they had shipped the phone and it was on it's way. Fast forward to today when it was actually meant to be delivered  and still nothing. Anyone know what's going on? DPD tracking shows they have the information from Samsung but no parcel, I rang them and they just said speak to Samsung about it. Been on hold to Samsung for 2 hours and cant seem to get ahold of anyone.

I had the exact same - did get through to Samsung. Woman on the other end didn't really understand half the stuff I was asking and said to just 'wait for an email from Samsung with the delivery date and time' 😕

I dont suppose it was Katherine R was it? just managed to get through to her, couldn't really understand what she was saying as she was quiet and her English wasn't the best in the world but from what I made out of what she was saying is it's something to do with DPD. She told me that my £4 extra that I paid for next day delivery would be refunded when I receive my phone and she said it could possibly still be delivered by today, tomorrow or Monday. Im hoping today or tomorrow at best as I'm working all of next week and cant be in for the delivery if it turns up and nor can my family as they;re all working as well!

@BandOfBrothers he's not the only one. I got mine early and I used mine as normal yesterday and the battery life I found is a bit poor. On the Note 10 and it depends on what I am doing but I could get a day and a half to 2 days.

Yesterday I went from 7am fully charged to around 11pm down to 9% and that was just the odd bit of gaming, checking emails the odd phone call and listening to a little music but being at work and home it was mostly idle. It also got a lot warmer then my note 10+ I also had the screen set to 60hz like my note 10 (kept the settings similar and it died way quicker. I thought it might of been me but I also found a phone arena video that did battery comparisons and all of those tests the note 20 ultra died first every time and they compared the Exynos versions and not the SD versions.

In their battery test the Note 10+ outlasted the note 20 ultra every test. Looks like for the first time I am going to need to carry my portable battery charger but for me it feels Samsung has badly screwed up here.

I will add this. Yesterday there was an update released. I have installed it but I am also seeing my battery down to 50% as of now and it was 92% at around 7am. I will see if the battery lasts a bit longer or not with this update but I expected my battery to be a bit higher as it mostly been idle.

No I don't think it was the same person 😕 I saw on another post that others have got another email saying the delivery will now take place on Monday for them. Nothing of the sort for me.
If it wouldn't be a hassle, would you mind updating on here if you do end up getting in the next few days? Hope you do end up getting it tomorrow though so that you don't miss the delivery! It did say they couldn't leave it in a safe place either 😕

I saw others saying they got new emails too, like yourself, I have received no new emails or anything and it's still saying that DPD's still not got the parcel. I'll update you in due course when or if I ever receive my Note20 Ultra.