New out of the box phone

Daughter got a new straight talk samsung galaxy a32 5g phone for Christmas, but it has nothing but had problems, she gets a pixalated screen ND then it automatically restarts everytime that screen pops up I am nor understanding why or how this could happen any ideas on cheap ways to fix it 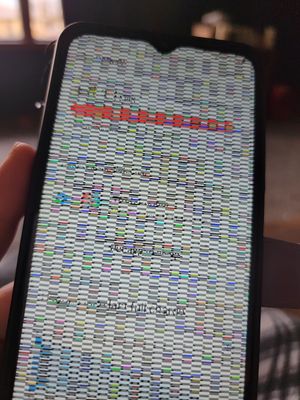 I have seen the crashing issue with a static/scrambled screens/black screen problem.

My simple solution: Turn off WiFi.

You'll probably need to do a hard reset: press and hold Power and Volume Down until the logo flashes on the screen.

I have 3 of these phones. They all fail the same way. I've had them since November.

In November, I discovered that WiFi seemed to be a part of the problem. I turned off WiFi (and data) on all 3 and had no problems, until yesterday. Yesterday I tested turning on WiFi again, and they each crashed with the same common problem.

If WiFi is enabled, and the phone is rebooted, it will likely crash again after a small delay. I've used this small delay to quickly disable WiFi.

However, if a crash has already happened recently, and you've rebooted normally, there's a good chance that you can enable WiFi and it'll work without problem (perhaps for a limited amount of time). I've only enabled WiFi for short periods of time after a recent crash successfully. After a longer time, turning on WiFi seems to cause the crash.

I believe the problem is being caused by a bad app that is attempting to access the 'net occasionally for some reason, and is triggering the crash.

I'm currently trying to isolate the bad app, but the nature of the problem and the delay between crashes makes this difficult.

Samsung CSR & TracFone CSR were unable to help, BTW. TracFone CSR told me I needed to buy a new phone, and neither Samsung or TracFone would honor warranty service!

Good luck. Let me know if turning off WiFi seems to stop the crashing.

EDIT: Update Jan 10, 2022 - I believe the bad app may be TracFone's "Device Pulse". Unfortunately, it can't be uninstalled or disabled. Instead, I've removed the last update and I'll test the older version R4.6.0-01. Additionally, I've changed the permissions to deny it location. The newer version was R4.7.0-04, and I'll be testing it too, with the removal of the two permissions location and physical activity. The recent comments on this app in the Google Play store and my experiences indicate that this is the likely problem. Still need to verify, and only time will tell!

EDIT: Update Jan 11, 2022 - Quote from Google Play on Device Pulse by Steve Strand on December 14, 2021, "... I have to restart my phone any time I need to use an app requiring a network connection. If I wait longer than just a few minutes to use internet or any other network app, I have to restart it. ..."

Update 19 Jan: After 12 days, one phone crashed when turning on WiFi, the other two did not. The one that crashed had version R4.7.0-04 of Device Pulse. I'm now testing with all phones rolled back to R4.6.0-01 and the app disabled. Here's my strawman "How-to" for this problem (subject to change).

1. If your A32 5G has a scrambled screen or the black screen of death, reset the phone by holding down the Power and Volume Down buttons until a logo flashes on the screen. It should then reboot.

2. Disable WiFi. Only turn it on when you need it; and if you've just restarted, wait a few minutes before enabling WiFi. Turn it off when not in use. I have my WiFi set to NOT automatically reconnect.

4. (Experimental) Roll back TracFone's Device Pulse to the initially installed version, and remove permissions from that app (as much as possible). [Settings - Apps - Device Pulse - 3 dots - uninstall updates; ... Permissions - click each and then Deny] Disable WiFi and restart phone for settings to take effect.

5. Uninstall any unneeded apps. If you're not sure if an app is needed, best to leave it installed.

6. Disable any remaining unneeded apps. Some pre-installed apps can't be uninstalled, but you might be able to disable them or put them in deep sleep. If you're not sure if an app is needed, best to leave it as-is.

7. Update apps in both the Samsung Galaxy Store and Google Playstore (but do NOT update Device Pulse). [Note: my 3 phones rebooted when updating "Android System Webview" - not sure why, but the reviews of this app are not good.]