Computers & IT
Hi, I've purchased Samsung pro 360 i7 leptop back in September 27th 2021, received it in 3-4 days which was awesome but I've received it faulty meaning it had glitching issues, sound issues and most importantly poor battery life only to max 3 to 4 hours witout fan that is!
Now I returned it on the 6th of October, then waited till November for them to say it's still out of stock. Then finally decided to get refund. However, they said I have to return the mouse I got as promotional item alongside my leptop which was fine. I sent that on the 17th of November they said whole process would take 7-10 days. But I call them back a thousand times later they say its still on the process they haven't yet received the item.
So, I email them again after a month later they say to send the tracking number which was then provided however, its now 2022 but they still haven't issued any refund their excuse is they looking for the returned items in the warehouse. Which was the leptop that was sent in October and the mouses sent in November. Bare in mind they were colleted from me by their own teams and its been freaking 3 months since then and you ask for the tracking number now?
I have called them contracted them a several times now but they keep on sending apologies. I have given them times under the consumers rights but its been passed 2 weeks now no response from them after that. I don't know what to do anymore its not £1 or £10 but £1,275.15 !
I'm really distressed in what to do.
Please someone help me
1 Like
Share
Reply
12 REPLIES 12

Computers & IT
I did tell them after the wait I will be taking legal actions but they haven't responded yet I dont know what to do anymore.
0 Likes
Share
Reply

I'm so sorry to hear that you are having this experience. Would you be able to send us a message to our SAM_UK account: https://eu.community.samsung.com/t5/user/viewprofilepage/user-id/1716597 so we can get some more details and get this looked at?

Computers & IT
Hi than you very much

I have attached a screenshot of final threat. However not sure if it sounds professional enough before sending it. Really appreciate if you could have a looks plz 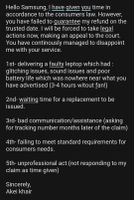 Computers & IT
Where do I send this message plz?
0 Likes
Share
Reply

Computers & IT
This is becoming worryingly coming incompetence by Samsung, you should have given the a few chances and then raise a dispute with your credit card company.

Note this is why I no longer wish to use Samsung Pay, yes a cashback incentive but if it goes wrong ...
0 Likes
Share
Reply