This SSD has been transferred from an old system which only supported SATA/300 speeds. It is currently used for:

a) Storing my data on which is also synced to OneDrive

b) Running VirtualBox VM's off of.

a) the drives speed and

b) full speed of a SATA/600 interface hence buying this Icy box enclosure.

I do ultimately want to replace this drive with a large capacity internal 2nd NVME M.2 4th Gen drive but cannot afford that right now.

Basically if I run the drive long enough with OneDrive files being synced with the cloud and I run a VM long enough the drive and/or connection to the drive drops out and it is no longer visible on the system. A reboot 'normally' fixes this issue but the last time I rebooted it was not good enough. I had to unplug then plug back in the drive before it showed again.

I have tired a 2nd Icy Box enclosure but initial indications show the same issue.

Monitoring the temperature with CrystalDiskInfo I have never seen this drive exceed 50 degrees C. 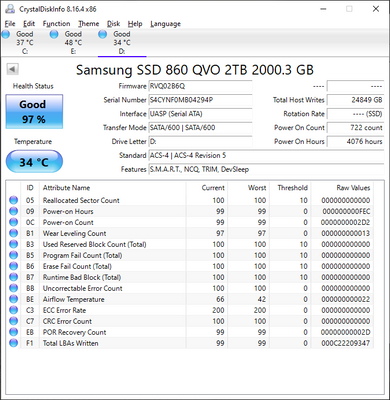 Is anyone able to point me in the correct direction as to what is causing this issue? A drive fault?