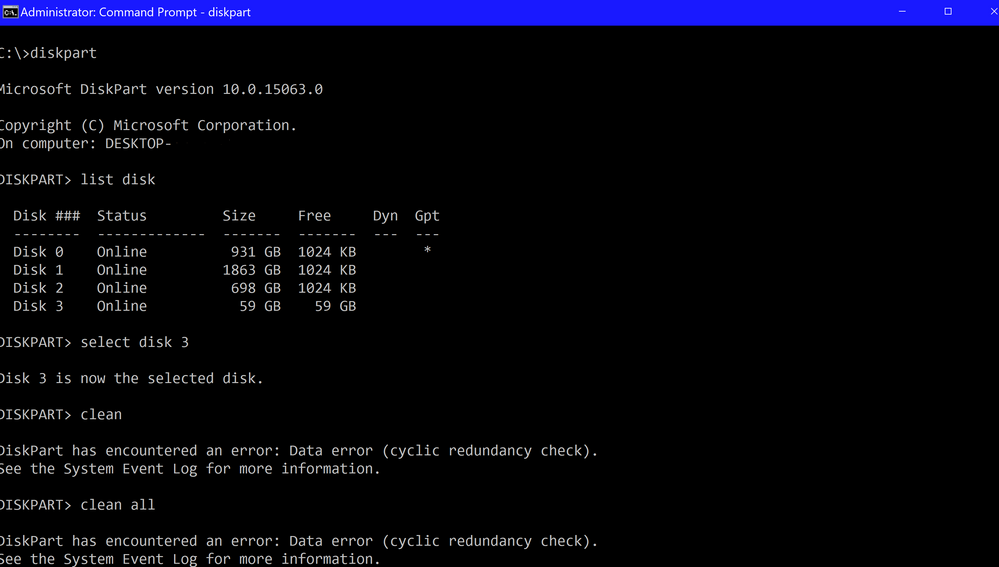 Before I start I should say I should probably post this on the Microsoft forums as well but I want to post it here first.

I have a 64gb Samsung evo Micro-SD card and have had it for a few years, recently my Samsung Galaxy S7 stopped detecting the SD card, after many restarts, I plugged the  SD card into my PC and it said I needed to format it before I was able to use it. I was a bit confused at first but seen as though I don't have very much important data on it at all I decided to go ahead with the format. After about 5 minutes of the format bar not moving it said windows was unable to format, after have a bit of knowledge about computers this means that it is most likely corrupt so I tried something else, I went on to CMD (Admin) and went onto my sd and did the chkdsk command but my hope was short lived after about 10 seconds later I get an error saying something along the lines of "unable to run chkdsk because the file type is raw", I tried another option which is to use disk managment which said it worked to format but when I tried to allocate it a primary partition it said "data error (cyclic redundancy check)." so I tried the last thing I could think of the command DISKPART so I selected the sd card which was drive 3 and then typed command CLEAR but after a minute or so I get the same error which is "data error (cyclic redundancy check)". I tried it again this time with CLEAR ALL command but met with the same error message.

Can anyone please help me be able to format my micro sd card I am not bothered about the data on it as there is nothing important on it.

We recommend reaching out to our dedicated Memory Team. You can contact them at: Samsungmemory@hanaro.eu

We recommend reaching out to our dedicated Memory Team. You can contact them at: Samsungmemory@hanaro.eu

Thanks, I will try.

Same problem for me too any solution

The problem is been resolved as we speak, I emailed the Samsung memory team at 'Samsungmemory@hanaro.eu' and they are sending out a replacement so I recommend you do this.

I have the exact same problem and wierdly enough it has come about in the same way. Card was used as extra sotrage for my Samsung Galaxy S7 edge. Phone stopped detecting it and inserted to pc card reader to format but unable to. What exactly is the solution? Do I just email?

Yeah you just email them with your problem and follow the steps they tell you.

I wrote them an e-mail but they want me to send the sd card to the netherlands which i reject because there are passwords and ssh-private keys on the sd card.

They told me to cut 50% of the connectors which does not really solve my problem because the card is still readable.

This morning my 2nd Evo micro SD card broad (but this card was much older).

Evo Cards simply seem to have a bad quality because they live so short and since the support is so bad I am not sure If I will ever buy an Samsung EVO SD card again.

But thanks anyway for the info with the support email address.

Please give us suggetions for how to format me my 64 gb eva sd card. already try from cmd but not format.

Please help me with the solution,I am facing the same issue while carrying out the formatting process I receive the same error message in cmd