When using the K650 sound bar and two R1 Wireless speakers in surround sound mode over wifi with the latest firmware, The quailty of the sound K650 drops, sounds very muddy. As soon as you use the sound bar on it own, the sound bar improves. this is happening for a quite a few users.

Nick0
First Poster
In response to abob36
Thought so, thanks.
0 Likes
Reply

Peejay84
Navigator
In response to Nick0

Music from the surround setup sounds great, but rears get very quiet when used with TV.

Optical workaround works, but only if you unplug ARC. On top of that you have to reconfigure surround every time you change something because channels get all messed up (fronts are doubling left and right surround).

I really hope samsung isn't going to leave us like that.

I've been through similar issue with a high end laptops of various brands using Optimus fast graphic card switching tech. After one random update of something , it caused massive memory leak.

There was a huge "support group" like yours, with hundreds of posts on NVidia,  Intel and Microsoft forums.

Kevlarr
Explorer
In response to Peejay84

I've only had this kit since Dec/Jan. So respect goes to all of you who have put up with this fiasco for longer.
After installing the latest (R1) speaker update I spent (wasted) most of a nice fine Saturday messing about with
different setup connections and came to the same findings as most others, optical is ok any other is not.
I think we all appreciate each others help and advice but considering this kit is all from the same manufacturer,
it should work out of the box/plug & play and have consistant volume levels on ANY connection method (unless
stated otherwise).

To receive info from Samsung saying that "the most recent update has yielded positive results in our AV department lab tests, and that the grouping of products within their tests are working to specification" is just useless to us. They need to clearly define the equipment (whether the tv model makes a difference) cables used and any HDMI standards, all relevent tv/soundbar/speaker settings, video/sound test files and which connection methods (optical/HDMI/WiFi) have been tried and which work or not (and why not)

Good luck to Robbienobs regarding the engineers visit.
It'll be interesting to see if the engineer has been briefed about the problem and if he knows that there is (at the time of writing this) a 64 page forum thread about it.
I'd be tempted to say to him... there's the kit, make it work on HDMI and WiFi.
I think it would be an important point for the engineer to not be able to get it to work, rather than him report back that you could not get it to work.

The only redeaming feature I find useful is the ability to play music from my NAS drive or internet radio from TuneIn in the multiroom app.

In the Blu-ray settings menu if I change the resolution from auto to force a 4k output, the screen goes blank with a source connection message after a few seconds.
So, unless there is some setting that I've missed because I expected a simple plug & play, I suspect the HW-K650
will not do 4k pass through from the UBD-K8500 (a topic for another thread maybe?)

Just got an update to the soundbar, really think it helped with the rears

frustrated
Apprentice
In response to frustrated

Can you please let us know the firmware versions you have for the speakers sound bar and tv.

abob36
Explorer
In response to frustrated

Robbienobs
Pathfinder
In response to frustrated

A covert update of the soundbar........ Maybe samsung have been watching the feedback on here for a change.

Not had opportunity for testing yet but will get on asap 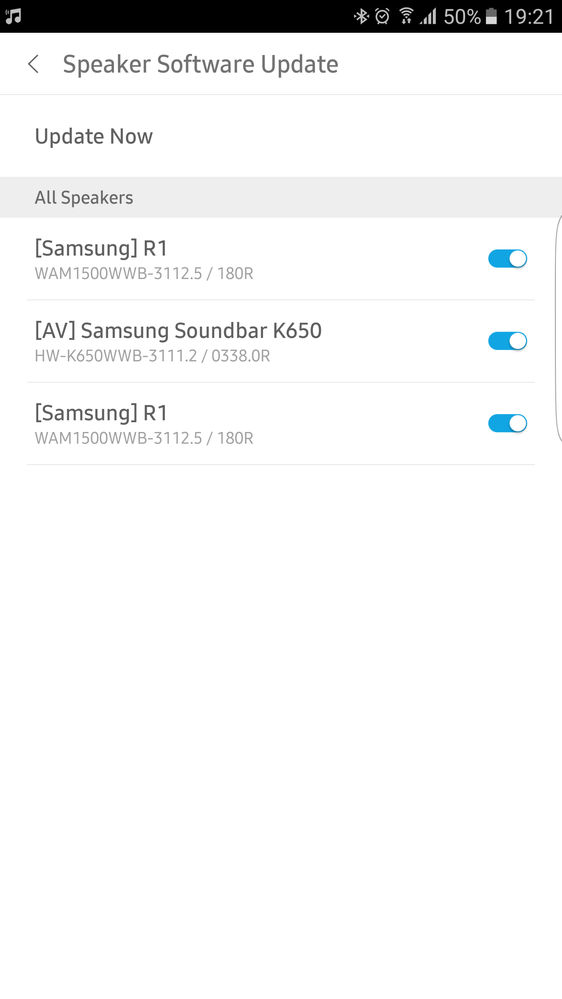 Podavies, how is the sound via HDMI ARC? Mine never sounded any better than Wi-Fi. I am excited to get home and try this.

In the Blu-ray settings menu if I change the resolution from auto to force a 4k output, the screen goes blank with a source connection message after a few seconds.
So, unless there is some setting that I've missed because I expected a simple plug & play, I suspect the HW-K650
will not do 4k pass through from the UBD-K8500 (a topic for another thread maybe?)

Unfortunately, it only has an HDMI 1.4 input, so no 4K or HDR. This also would render useless the using HDMI 2.0 cable for ARC as 1.4 is max spec it can handle. Wish I had researched that sooner than now. I found it on a third party site, but if 4K is not passing through, that is why.