When using the K650 sound bar and two R1 Wireless speakers in surround sound mode over wifi with the latest firmware, The quailty of the sound K650 drops, sounds very muddy. As soon as you use the sound bar on it own, the sound bar improves. this is happening for a quite a few users.

I just emailed the normal customer enquiries but I think I queried under R1 as the product.  I think I decribed the issue clealry so it is puzzling that the agent didn't acknowledge it as a known issue given the amount of exposure Samsung have had to complants about it.  Might be that the agent was searching their database for problems explicitly with R1's and not HW_K650's.

I think it is strange that the issue has not been resolved.  On the face of it, It seems that all that is needed for the WI-FI issue to be resolved is to change that data sent in the packet to set the R1's volume, to tell them to play louder.  I guess this data originates in the TV and is messed up in the Wi-FI communication between the TV and soundbar since it works through bluetooth.

I just want to clarify (for the moderators who hopefully have reported back to HQ) that this not only affects the R1's , but the R7's too. So it is a problem across the range. I too have been moderated for sharing email addresses, but I am glad to divulge any information if you wish to PM me. I have had confirmation from Samsung that they have escalated the problem to tech guys in Korea, but no firm date for the fix. We have requested that we are kept informed of progress, as it seems that for a long time, the Samsung Community have been left in the dark with regard to a solution to this problem. I have been informed that the moderators feel our frustration and deal with it by way of a stressball!!! Someones balls will be stressed if we dont get an answer soon,

It's always been the same; emails from head office are informed and concise, but any communication with the standard samsung customer services remains generic in response and this includes what they call the product specialists.

This is a similar set up to many other large corporations but sadly samsung are not so good at escalating issues like this to senior teams and then communicating back down the line (and real samsung employees); the only reason I am in contact with them directly is I managed to get hold of the US Samsung and UK Samsung CEO's email address's, and thankfully they put me in touch with the real customer service team based within head office.

This senior team have been very helpful in answering all my questions and do put pressure on the tight teams, it's just I have to chase for the information constantly or they go quiet; but without their efforts I would surely have sold this system and moved on by now.

The original firmware fix was to the soundbar which corrected the muffled sound. Head office then told me a further update was being worked on for the WAM's to enable greater rear volume, but it appears this wasn't tested under "real world " scenarios........... As someone mentioned previously when you initially set this up as surround the volume levels are ok during the set up, but once saved and the source changes to something else the volume issues remain.

I am due an update on Monday from Head Office on what's been fed back from tech teams here and in Korea, but I think it's the UK tech teams that need to reproduce the issues prior to Korea speaking a fix.

I also agree it appears simple to fix as before with other issues but also as someone else mentioned there are so many different variations of firmware and hardware and probably teams that oversee each firmware, TV, soundbar, WAM's, Samsung Application etc etc

Added that point about the R7's to the escalation we’ve got going on this for you guys @Neilwales. I'm also going to edit out your email address and ask folks to PM you instead (less for censorship and more to help stop you getting hit by spammers etc.)

Everyone – if you want to share personal contact details with each other, that’s cool. Just ask for people to PM you and do it from there.

News from our AV tech guys:

The update to 3112.5 will give a greater volume balance control between the Soundbar and WAM speakers being used as’ rears’. The adjustment to the independent levels relative to each other can be done either within the Wireless Speaker Manager or Multiroom App (depending on what you’re using to group the speakers).

The control will look like this in the Wireless Speaker Manager: 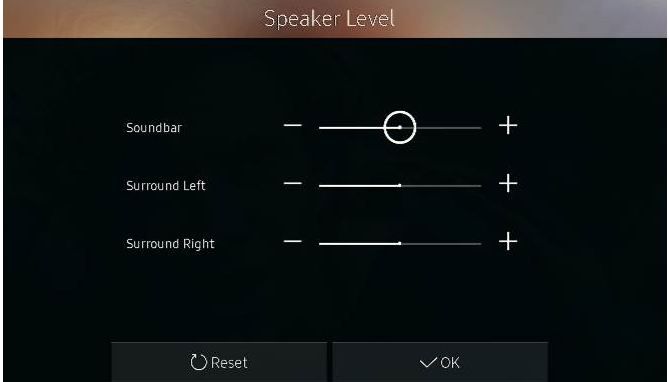 And  this in the Multiroom App: 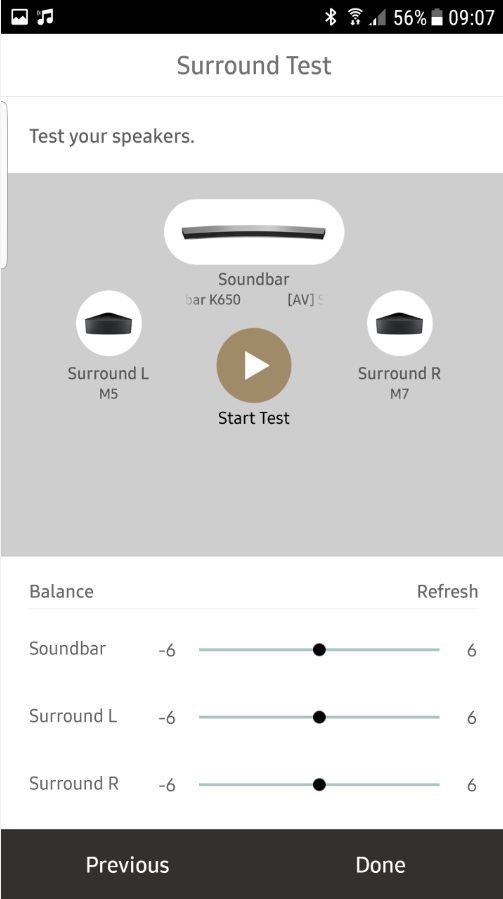 Once those levels are balanced to your preference, the speakers are then grouped together using the TV Wi-Fi card to create an Access Point which both the Soundbar and Surrounds connect to; or using the Soundbar Wi-Fi to do the same if the Multiroom App is being used to group them.

In this setup, the physical volume control for each speaker is a 'global' one for the whole grouped system, so any adjustment in the volume will retain the balance you’ve set.

There’s no advised optimal balance – it’s very much up to you to play around with it to find out what’s best for you.

Update is available over the network now. Should be an auto-update for most speakers, but if yours aren’t updating then use the Multiroom App and go to Speaker Software Update.

Just to add, this update was a response to and a direct result of the experiences and info you guys reported to us – so thank you. Let us know how it goes.

I am already on 3112.5 on my R1 speakers. I can confirm that even with the sound bar at the lowest level and the rears at the highest level on those set up screens the rears do not have enough volume.

Just re read the Moderators post; we have reported that we have loaded this latest firmware, it doesn't work and this is the basis of the latest set of conversations on here.

This was fed back to your AV teams and Korean team by the head office team...........are you saying this has not been progressing??

Same here... the update had ZERO effect and the rear sound coming from my R3's is still nearly non-existent no matter what I set the rear volume to.

For F's sake!.. Any normal company would have at this point put a tech person directly in touch with someone on this forum to assist in solving these issues. (robbienobs would be the perfect person for this assist) Instead Samsung continues to flail around causing more animosity to be directed towards them.

I’ve never experianced anything like this before. At this points you just have to laugh about it to keep from going crazy.
0 Likes
Share
Reply

So I've still got a system that doesn't work as expected!

Look forward to the next update, hope it doesn't take as long this time!