I've performed the firmware update for my HW-Q90R soundbar.

Given that there is no official statement from Samsung with the details of the update  I would like to check with the community what new features have been included.

- How can I check now the firmware version on the bar, to check if the rears are updated as well? In the past just by holding the sound mode button on the remote with the soundbar off the different versions appeared on the display.

Now it is not case. Now by holding sound mode for 5 seconds with the bar off it enables a new functionality: Test Tone

- EARC functionality is enabled, this is great.

- Test tone: What it this for? It performs a test of the sound of the different channels, is it useful for anything else?

- Now in the sources appeared TV SPEAKERS, what is this for?

am I right in thinking that on the Q90r,

if you use smartthings to update it will update the soundbar and the rear speakers and the subwoofer?

Aber1967
Explorer
In response to denodan

fragile04
Back for More

Until the firmware update everything worked well Now :
** The normal link via hdmi arc doesn't work - no sound on soundbar and Tv at all **
After update (1010.5 (update by smarttihing app)) I found issue  HDMI ARC not working no sound ,
but  signal on tv is normal setting Soundout ARC > PCM   ( I trying on my old soundbar K450 is normal  )

2. I linked the tv and sound bar up with a optical cable. Sound is works , But it don't have dolby atmos

I appreciate all the help you can offer, thanqs you very much in advance and sorry for the bad english

It's sort of good to see that I'm not the only one that this firmware update screwed over.

I'm almost in the same boat as @fragile04 above, except that my HW-Q90R is connected to my Q90RATXXC TV, which (for now) doesn't have eARC support.

Same as @fragile04, my setup has been working flawlessly ever since I set it up.

I got Dolby Atmos and everything working from apps like Netflix, over to the HW-Q90R using ARC connected with a HDMI 2.1 compatible cable.

However, suddenly things just stopped working, and i started getting this message on the TV: 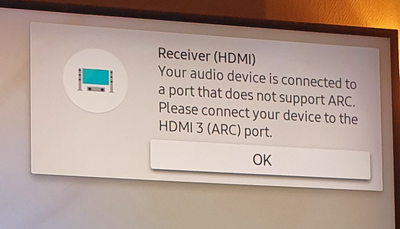 After some investigations, I realized that the soundbar got automatically updated by the SmartThings app at some point (without my consent or knowledge, not even a small notification...), and was now running the 1010.5 firmware.

Ever since, I can't get ARC working again.

- plugging the HDMI cables out for a few minutes, and then back in again while the devices were powered on, to renegotiate things

- tried powering off the soundbar for a few minutes, and then plugging it back in again.

I know that the soundbar itself works just fine, because by NVIDIA SHIELD Pro, that is directly connected to one of the inputs on the soundbar, can run Dolby Atmos (and anything else) just fine out through the soundbar.

So it's just things that are connected to, or running on (Netflix, etc.), the TV that can't get their sound out to the soundbar, as they rely on ARC to carry the sound...

Tried calling support, but they just said I had to take the whole soundbar system back to the retailer, but come on, that's ridiculous, a replacement just because of this?!

Hope someone else with a Q90 TV can confirm if they have similar issues, or if it's really just my setup that's broken now.

One would think that by sticking to products from the same brand, you would at least be ensured that Samsung properly tests compatibility between their own products before releasing, and auto-updating, a bunch of devices across the world... 😞

Hi guys, I'm wondering if you can help. Basically everything is working fine. Everything is wired using these cables and I get full Colour Space options and HDR functionality on the Shield now, which I never got with any other cables :

Nvidia Shield Pro 2015 (this Shield is rooted so I can't get the full HDR version of Netflix from the Playstore as it detects the root. I sideloaded the latest version of Netflix to the Shield but, for some reason, I only get SD video/audio, no idea why?! I signed out of Netflix and signed back in to test if that worked, nothing)> Q90R (HDMI 1))

Basically, as I said, everything is working fine. I get Atmos via KODI on the Shield, Atmos on SKY Q where available. The TV apps (Prime Video & Netflix) and the apps on SKY Q offer HDR and Ultra HD 4k video but audio seems to be capped at 5.1 surround sound, which I understand, as I would only get full Atmos and Dolby Vision from the native apps if I had eARC, correct? So basically the Firestick 4k offers Dolby Vision, Atmos and all the bells and whistles, so I want to get full access to all that. I bought this HDMI switch which I believe someone suggested in this thread:

and wired my Shield and the Firestick to this and wired the switch to my Q90 all using 48gbps HDMI with ethernet for every connection, as I explained. I get HDR video as I did before on Netflix and Prime, however, I'm still only getting 5.1 surround on Titles such as The Witcher and Daredevil Season 3 which should offer full Dolby Vision & Atmos TrueHD. I'm stumped. I even plugged the Firestick directly into the Q90 to check if I could get full functions then. Still not, capped at 5.1 on The Witcher. Strangely, if I watch Jack Ryan on Prime Video on the Firestick even when it's just plugged in to the TV, I get the Dolby Atmos message on the bar (probably the lossy version but still more than I get on any version of Netflix). Am I making a basic error somewhere? What would be the optimal way to set this all up to get full lossless Atmos & Dolby Vision on Netflix & Prime with the setup I've explained? Any help would be much appreciated.


The TV apps (Prime Video & Netflix) and the apps on SKY Q offer HDR and Ultra HD 4k video but audio seems to be capped at 5.1 surround sound, which I understand, as I would only get full Atmos and Dolby Vision from the native apps if I had eARC, correct?

No. You can get Atmos with ARC, too. eARC is only needed for lossless Atmos.


What would be the optimal way to set this all up to get full lossless Atmos & Dolby Vision on Netflix & Prime with the setup I've explained? Any help would be much appreciated.

No streaming service nowadays offers lossless Atmos, you need Blu-rays for that.

Ensure that (lossy) Atmos is available for your language and that your subscription plan supports Atmos. Also, I'm not sure whether the HDMI switch may interfere with content negotiation.

Fire TV Stick 4K only supports Atmos on selected Prime Video titles, so it's normal you won't get it when running Netflix on this stick.

Hi, many thanks for the quick reply. Yes, a lot of the things you wrote are things that I have considered and are very valid:

1. I have the full Ultra HD package from Netflix so that should give me everything.

2. I thought it could be the HDMI switch/cables that could be the problem which is why I plugged the Firestick directly in to the Q90 to check if I could get full functions, it made no difference. No Atmos or Dolby Vision seemed available. Denodan posted this picture in an earlier post here, is this not lossless Atmos?: 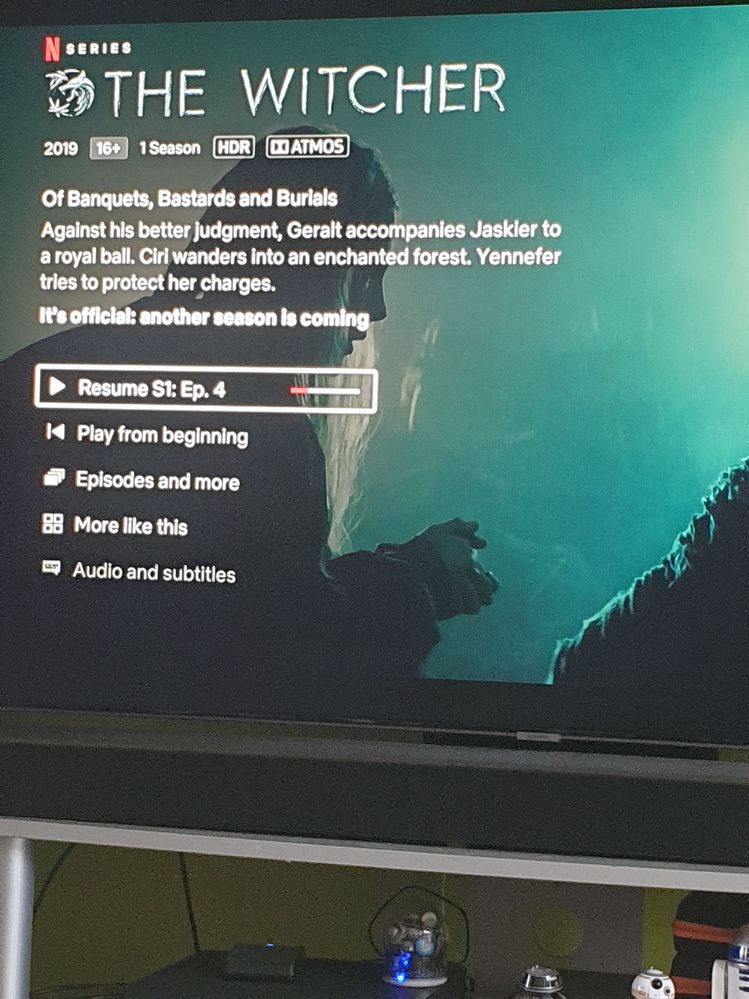 this shows the Atmos logo for The Witcher. I have never seen this logo on any title on any of my Netflix setups which is what got me wondering what I'm doing wrong?

I'm guessing that one way to get the full functions would be to get the full/official HDR version of Netflix on my Shield? Maybe if I buy an unrooted Shield TV:

would I get the full Atmos content as in the picture then?

3. I have the enhanced HDMI functions activated on the TV which is why I do get Ultra HD 4K and HDR content on Netflix. As I said, I have never even seen Dolby Atmos scroll across my Q90 on any title on Netflix. Jack Ryan on Prime is the only time I've ever seen it, but imo Netflix has a lot more content that I would want to sample in both DV and Atmos... Let me know if I'm correct and I'll get a 2nd Shield or any other advice as to what I might be doing wrong?!.


2. I thought it could be the HDMI switch/cables that could be the problem which is why I plugged the Firestick directly in to the Q90 to check if I could get full functions, it made no difference. No Atmos or Dolby Vision seemed available. Denodan posted this picture in an earlier post here, is this not lossless Atmos?:

You said you got Atmos with Jack Ryan on the Fire TV Stick when plugging it directly into the soundbar (and perhaps even if you plug it into your TV), but you got no Atmos with Netlifx with the same Fire TV Stick: this is expected, as I said the Fire TV Stick 4k only supports Atmos on Prime Video, not on Netflix. See the product description on amazon.com or on some other regional Amazon website. It says (in English): "Experience immersive sound with Dolby Atmos on select Prime Video titles. "

What I see in picture in 2. is a screenshot that shows that The Witcher is available in Atmos (not in lossless Atmos, where do you see "lossless"?) on Netflix. Of course, you need a proper setup for this and the Fire TV Stick 4k is not one, for the reason above.

I think 3. is again related to the fact that you are still talking about your experience with the Fire TV Stick 4k.

Hi, I have Prime & Netflix on the Firestick 4k, the built-in TV apps & on the Sky Q apps. I have never seen that Atmos logo on any Netflix title on any of these viewing methods. In particular, considering SKY Q is plugged straight in to the bar, I would have assumed that I might be able to get some kind of Atmos/DV content on SKY but maybe those apps don't offer it like that? I'll have to investigate that.

Anyhow, I've ordered the Shield TV it's just that, with all the different ways of accessing Netflix here, none of them seem to offer me the full audio & visual options available, thus saving me a few quid from having to buy more equipment.

If @Denodan is around, I would appreciate if he could let me know his setup. And thanks for your suggestions mauromol.