I've performed the firmware update for my HW-Q90R soundbar.

Given that there is no official statement from Samsung with the details of the update  I would like to check with the community what new features have been included.

- How can I check now the firmware version on the bar, to check if the rears are updated as well? In the past just by holding the sound mode button on the remote with the soundbar off the different versions appeared on the display.

Now it is not case. Now by holding sound mode for 5 seconds with the bar off it enables a new functionality: Test Tone

- EARC functionality is enabled, this is great.

- Test tone: What it this for? It performs a test of the sound of the different channels, is it useful for anything else?

- Now in the sources appeared TV SPEAKERS, what is this for?

Alexandri
Navigator
In response to Ivan1979

Today i get the new 1369 Software. But no changes in case of eARC : 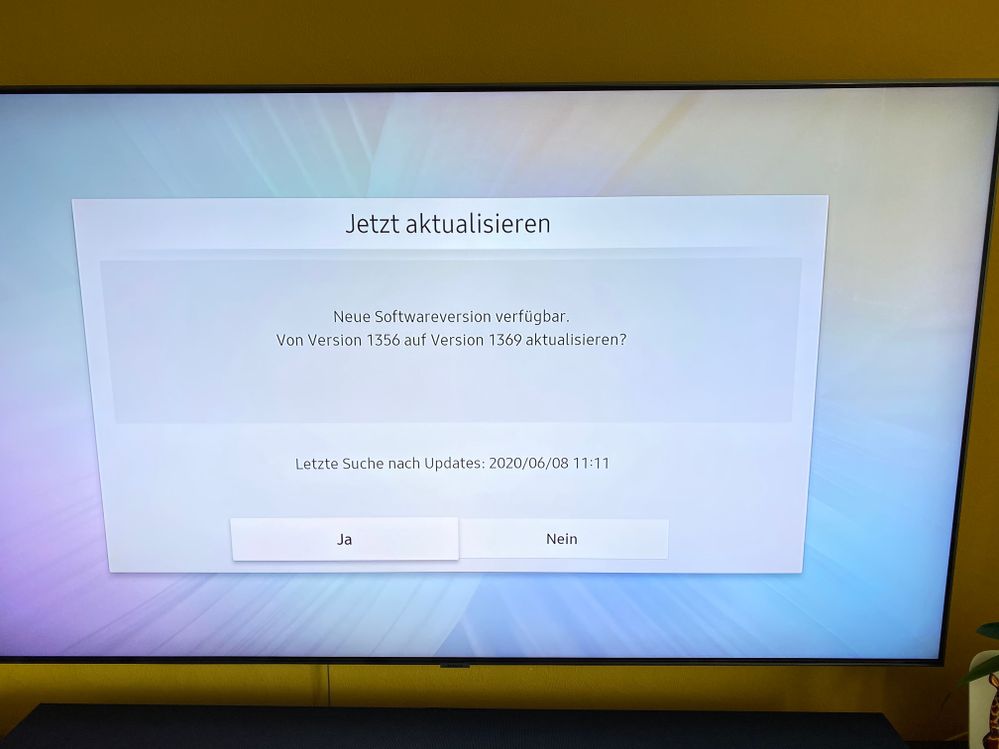 I just bought Sony XG950 and a soundbar Samsung Q70R. I have connected them via eARC HDMI.

The soundbar displays eARC. But when I play a Dolby Atmos movie with Kodi or other player, the soundbar does not show "Dolby Atmos".

YourMainDude
Explorer
In response to Estevez1979
" recommend to set Earc in your C9 to passthrough, not Auto. "

How do you do that?
0 Likes
Reply
Highlighted

YourMainDude
Explorer
In response to Estevez1979

" recommend to set Earc in your C9 to passthrough, not Auto. "

Where is that bit of controls in the C9?

Estevez1979
Explorer
In response to YourMainDude
Follow this sequence of selections:
All settings/Sound/Sound out/HDMI ARC

Within HDMI ARC select:
Digital Sound Out = Passthrough
eARC = ON
1 Like
Reply
Highlighted

YourMainDude
Explorer
In response to Estevez1979

Hi, I have a Q80R and my soundbar seems to be caught in an endless update loop.  Whenever I turn it on it goes from D.IN to UPDATE to D.IN to BYE for 2 cycles and then won't let me change anything apart from turning it off.  And when I turn it on again it goes through the same update cycle but without any better result.  It's been doing this for close to 10 times now.

I tried to reset it by pressing the -/+ buttons on the soundbar or the play/pause button on the remote control but all it does is start and go through the same update cycle.

Does anyone have any ideas?

This is for everyone following this thread.

I own one of the first 90R system builds and like many, have had a whole host of issues.

Here are the big ones:

1)The sound bar was stuck on firmware 601.2 and neither the USB or SmartThings app would recognize or apply an update; there have been 2 updates since release.

2)The sub and satellites would intermittely drop off forcing me to cycle their power (essentially unplug them...) when it came time to spin some movies or shows from my BD player.  There were occasions where the sub & sats would lose connection in the middle of use, but that was rare.

3)Samsung support would repeatedly make me jump through hoops to reset/insert the USB stick/etc etc etc whenever I contacted them - and I did so more times than I care to admit.  Their troubleshooting steps were completely useless and wasted my time.  They would also generate case numbers that either disappeared or were closed with no notification.

Lastly, they promised follow-up via email or a return phone call numerous times that didn't materialize.

Considering the price-point of this top-line model, I've been completely shocked how poorly executed my support experiences have been.  Until recently...

I was finally granted a service ticket and had the unit shipped to the third party N.J. service center.  They turned my repair around very quickly.  They diagnosed the issue as "Won't recognize network" - which seems strange to me but whatever.  They replaced both the WiFi module and the Main PCBA (think of it like the motherboard).  The unit was returned to me with 1008 firmware and I prompty ran SmartThings and it updated smoothly.  It's now at 1010.5.

I ran through the Test Tones mode - that's a nice feature btw - and all was good.  I then checked the complete firmware module status and the sub & satellites were still at 133.  The update process for those is important to do after you update the sound bar's firmware and it's not automatic - from what I can gather.  Following those manual steps carefully and pay attention tot he red LEDs on each unit.  Once the update process starts, the subs gets it first, followed by the the L rear and finally the R rear.  Don't be in a hurry, it takes a good 5 to 10 minutes to completely updates all three components.

I'll report back on how my particular sub & satellites discconnection issues have faired ...