Mine is due for despatch tomorrow.

Is it available on the high street or anywhere ?

This is going to be a saga isn't it

After three no show deliveries mine turned up today at last!

Now i have a new problem, its an lte version which doesnt appear to want to connect to any mobile service, tech support saying i may have to return it!!!

After three no show deliveries mine turned up today at last!

Now i have a new problem, its an lte version which doesnt appear to want to connect to any mobile service, tech support saying i may have to return it!!!

Ooooh so Samsung have started to actually dispatch the LTE versions now? Who did you order from? A retailer or direct?

Also I was under the impression that the UK networks weren't doing LTE plans for the watches unless ordered from them?

Mine turned up today and it's amazing. Pity Samsung didn't communicate the delays though.

Dont know about the others but with Vodafone you can get an addon called Vodafone One Number, it allows another device to become a secondary device to the main phone number. Just gave them a device id number and its done. Unfortunately my watch is telling me mobile service isnt allowed for this region!! Tech support are scratching their heads!
0 Likes
Reply

Spoke to customer service online and they said it will be delivered today but the website says not dispatched. Not she if the representative was being truthful. We shall see what happens in the next 12 hours.

Chris_UK
Explorer
I spoke to them again on Wednesday and they said they would send me an update by email by 2pm on Thursday...and nothing. Its still "shipping requested" online with the comment "Ships by Sep 21st 2019".

I understand that things can go wrong and there can be delays, but the lack of communication or updates is the bigger issue.

What is aggravating is the fact that they are feeding us a load of bull (when they do actually communicate with us!).  I would rather they say that there is a production or transport delay and forecast a revised despatch date, so that customers are not left hanging in limbo. 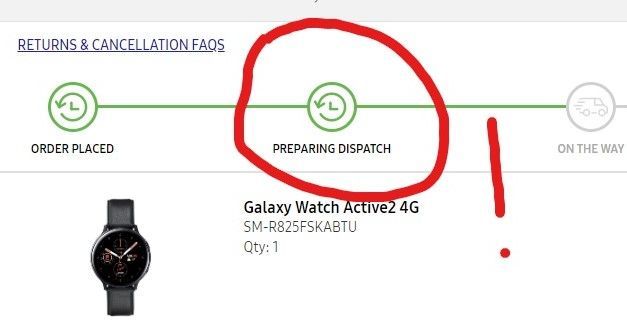 Great stuff, looks like an impending delivery, eh?  Notice my order had moved to middle position, so I am hopeful of a delivery some time soon.   At last, but all they had to do was keep us up to date.....