When watching the football UHD loop on Beta with a Roku Plus my KS60 7000 backlight did not go to 20 as it does when watching HDR on Netflix via inbuilt app.

Therefore I can confirm what has been said that the stream is not HDR but SDR.

Hi mate have you enabled UHD colour on the HDMI port? it has been confirmed earlier by other users HLG does engage

edit... talking the Roku here not the V6 before things get more confused

thanks for the tip

how do I do that via the Settings menu? 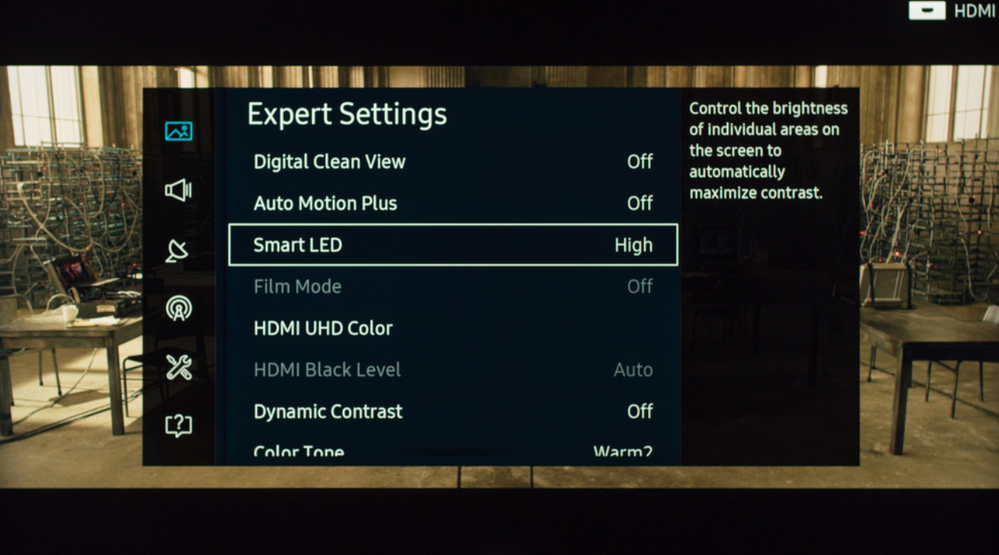 @sinjin wrote:
No I haven’t
How do I do that?
Sorry to sound dumb

Its in the hdmi uhd color settings.

sinjin
Apprentice
Thanks will do that tonight
1 Like
Reply

Just to confirm (again) that the Roku Streaming Stick+ does show an HLG / HDR picture (with max backlight) when viewing the UHD Football loop on a KS8000 TV.

So I sent an email to the Samsung CEO asking about why we are being ignored. Here's the message and the response.

My message to Samsung

Imagine my surprise when we reach the 2018 World Cup and my TV won't support the BBC's iPlayer 4K/HDR broadcasts. Not a single Samsung TV from 2016 is listed on their compatibility list: https://www.bbc.co.uk/iplayer/help/live-uhd

Oddly, some 2016 TV's from brands like Bush, FInlux, Laurus, Telefunken and Techwood are supported.

Now, am I to believe that Samsung's technology lags behind these (clearly premium) brands? Am I, as an existing rather than new customer, not important enough to have a nice crisp HDR image? HLG is included in ITU-R BT.2100, the international standard for high dynamic range programme production and exchange, and is royalty-free. There is no reason not to add it to the TV other than lack of effort and wish for me to buy ANOTHER new TV.

If you won't upgrade the firmware to support the BBC's implementation of HDR, tell me why. Am I not valued enough to watch football with the picture quality already-supported by my TV? Or is there another barrier to your adoption of it that your engineers cannot resolve (but those from Bush and Finlux can)?

I look forward to your response.

We are contacting in response to your communication to our CEO's office concerning support for HLG content within the BBC I-Player App on your Samsung KS7000 model. We recognise your disappointment that this content is not supported, whilst we recognise your listing of other companies whose products do have this functionality Samsung took the decision not to follow this route and apologise if this has led to you not being able to enjoy the television to your full expectations.

paul1111
Hotshot
That tells us everything from the horses mouth. Confirms that the ks will not be updated and does not bode well for a edid fix either.
2 Likes
Reply

I'm not sure if they will enter into a 'right of reply' or not but would you mind going back and saying that you understand there are technical limitations to the upgradeability of the iPlayer app but could Samsung at least commit to fixing the EDID software fault which would resolve this problem for anybody using an HDMI device such as streaming sticks or decoders?

I'm not sure if they will enter into a 'right of reply' or not but would you mind going back and saying that you understand there are technical limitations to the upgradeability of the iPlayer app but could Samsung at least commit to fixing the EDID software fault which would resolve this problem for anybody using an HDMI device such as streaming sticks or decoders?

If they did fix the edid there would be no incentive for all us owners to update.  They may think they will not get all the new sales,  but if they get a few they are still in pocket and we are out of pocket.

That response is disgusting! I really do dislike Samsung and will never buy ANY product of theirs again.

I upgraded my Samsung S7 edge phone to a different brand in April, would have gone for the S9+ but no chance after all this.

I hope a lot of people have read these posts and have gone elsewhere.