@Gfpluxthanks for explaining again with:

"Just to repeat and clarify. I have a Humax Satelite box with a hard drive for recording and a Satelite dish in the garden. (I live in Luxembourg). The recording is made by using the screen of the Samsung Q9 TV to record individual programmes or series....."

You have have taken the trouble to reiterate that you are using the screen of the TV, but the question still remains as to whether the Electronic Program Guide belongs to the Samsung Q9 TV itself, or whether it really belongs to the Humax.

Assuming that the EPG does belong to the Q9 TV, as you seem still to indicate, I would like to comment further, as follows.

Statement 1. "...If as suggested “someone” is messing up the codes then it suggests it is not a hardware problem of the TV and the recorder...."

Q3. "...Are there multiple people and organisations involved in these codes or is it one central organisation.... "

Statement 4.  "...This thread is as you say about a (possible) fault with Samsung TV’s but could it be a TV programme code issue, with two possible problems on the table it is easy for no one to take responsibility...."

Statement 3.  "...I am not a geek, just an old bloke with a wife who gets upset (very easily) when technology goes wrong and tends to blame me!"

1. This sounds just like the sort of line that Samsung's customer service was taking when I spent a year or more trying to discuss it with them, but all to no avail!

Even if Samsung's Customer Services were to have got it half right (see below) I believe that it would still be the responsibility of Samsung, with which its customers have their contracts. In that case it would still be Samsung which supplied the 'faulty' EPG to its customers, while claiming that their TV could record programmes from it, and whether they had actually previously acknowledged that it cannot do this, or not (see earlier in the thread).

3. Yes, I think I discovered that (at least with the Q9) the EPG in use is not a "Freesat" brand/product but one provided by a Samsung subsidiary/allied company (maybe the one which also provides the channel which has caused the other main problems described in this forum!). If so, it is indeed Samsung which could be described as the 'central organisation'.

5. My wife feels exactly the same!

She would much prefer to record directly from the TV to a hard drive, instead of using our Freesat Humax and Freeview Humax set hard drive top boxes, which both work completely reliably and use the same Satellite and over-the-air broadcasts.

She finds them much harder to operate because of the need to change the AV channel etc. which was the main reason we spent so much on the Samsung TV....

As I said, the Samsung recording issue is a whole different problem, not just the codes.  There appears to be a EPG interaction issue, a problem with USB connected devices powering down after periods of time (possibly linked to ECO mode but it happens on mine even with eco mode off) and possibly a firmware issue, plus of course, other things I cant even imagine.  My IT fixing brain (its what I do for a living) is suggesting to me that the Samsung firmware might be dropping the USB ports into low/no power mode when the set is in standby for x amoutn of time and failing to bring them back on when its time to record which is why the failure to record is very frequent.  If anyone has the equipment to try this, its worth turning all eco mode settings off then putting an externally (i.e. wall) powered hard drive into the USB socket and see what happens with recordings - so the TV doesnt have to drive the disk drive power when in standby (disk drive plugged into the wall power and a TV usb port).  Of course, this is a guess and may not make any difference.

Regarding the Humax box, which is a completely different setup, - as I said, I believe it is NOT recording what is on the TV screen.  It is recording directly over the satellite cable which I imagine goes from the wall directly into the Humax box does it?  I guess the Humax then has a HDMI cable from it to the TV does it?  If it does, you could unplug the humax from the TV and it would still carry on recording because it does it directly from the satellite dish.  Any recording failure involving the humax is not anything to do with the Samsung TV IF this is how you have it set up.  This is why you have, as you said, (paraphrasing) "rare occurences of failure, so rare that it could be external factors".  I would suggest this is more related to the recording codes that I mentioned.  Even Sky TV has this issue occasionally with series link breaking and thats a dedicated closed system of satallite channels and hardware all sold by the same company

Superuser I
I just bought the Q9F. Now its just waiting until it gets delivered ^-^
1 Like
Reply
Highlighted

Exciting isn't it! In some other posts I've shared all my settings for picture and what equipment I've got, you might find it interesting if you want to try different settings once it arrives.

Thank you Bobby and Tranx being so kind and explaining this all to a newby.

The HUMAX box set up is exactly as you describe. Sat cable from wall to Sat Box and HDMI cable to the one box of the Samsung TV.

I am intringued about the EPG. I USE the one “on the screen” but frankly don’t know where it comes from. I have a +20 year old sky box in another room (my office (man cave)) that has a similar EPG but perhaps not exactly the same visually but close.

We also have a French sat box STRONG without a hard disc. It has a dreadful EPG. Which tells me as I write this that the EPG is generated by STRONG and not SAMSUNG (Perhaps)

Is it possible to identify the EPG in any way. Is there a way of importing/using different EPG?

Perhaps this is a little off SAMSUNG topic?

Hi Gfplux, no problem, you are welcome.

The following link is an article that contains a picture of the Samsung EPG:

The article in the link is irrelevant, it is the only image of an epg that i could find and i cant upliad a picture from my tablet at the moment. 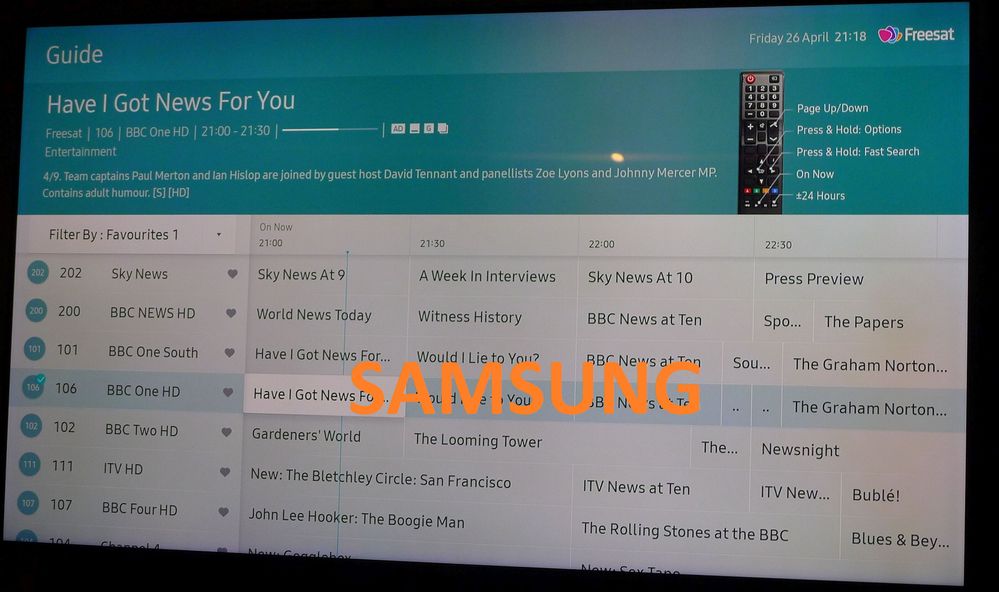 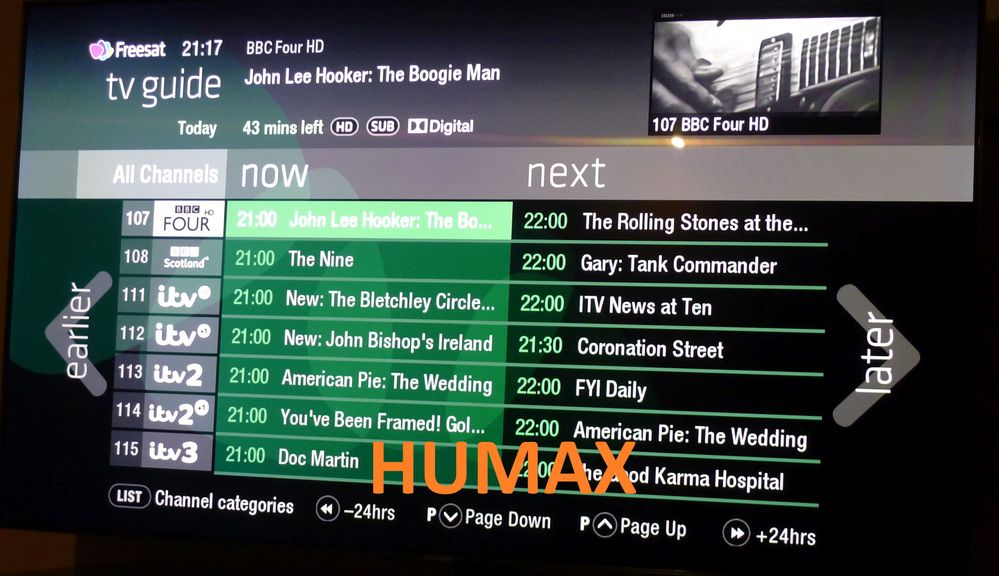 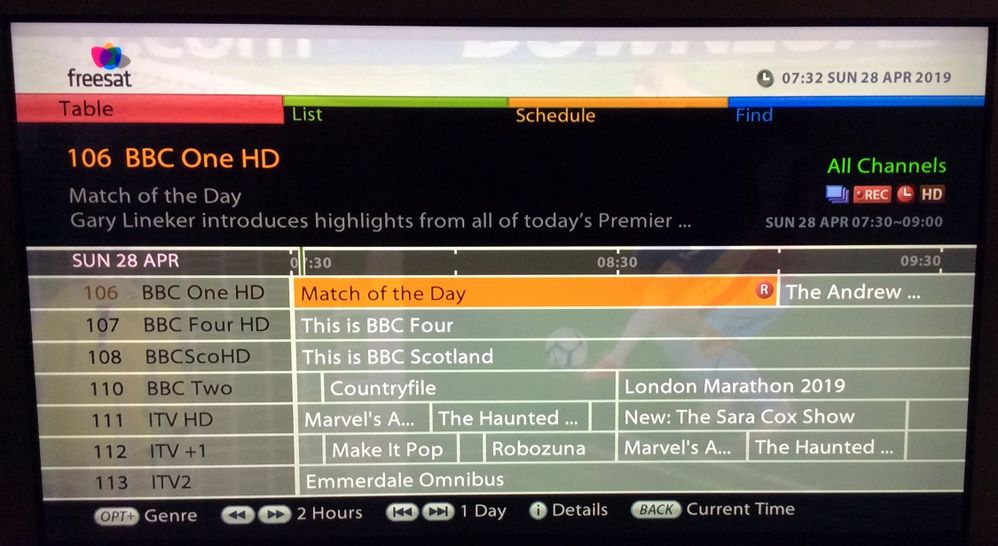 Good morning all, thanks for the EPG photos.

The photo I have posted (above) is my EPG from my HUMAX, I think.

As you can see It is recording match of the day this Sunday morning on BBC1.

It looks somewhat different to the HUMAX photo posted!

Good morning all, thanks for the EPG photos.

The photo I have posted (above) is my EPG from my HUMAX, I think.

As you can see It is recording match of the day this Sunday morning on BBC1.

It looks somewhat different to the HUMAX photo posted!

Right, your image shows a page from Humax. Not strange because the EPGs vary between newer and older Humax models so this would explain the difference. Imo in some ways the older functions, menus, and EPGs were better.