A picture tells a thousand words. 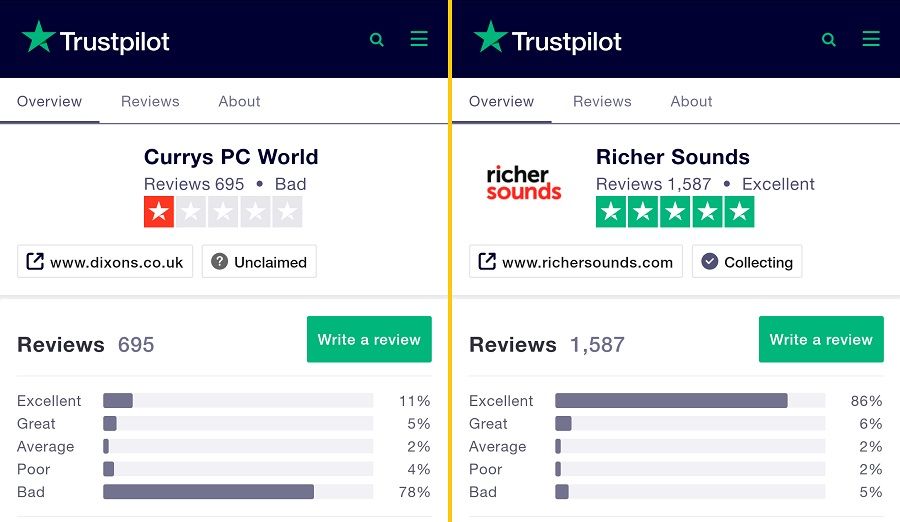 Yep everyone should be going here and post an excellent review. Curry's do monitor Trust Pilot,  and do respond.

Just left my feed back, don't think they can get any lower score.

What model of TV should I be aiming for, to get Atleast the same specs as my ks658000.

My draft email for proof is ready to.be sent for a section 75 claim...

But I'm unsure if it's good enough anyone willing to have a look it will be much appreciated.

My case is now with the financial ombudsman after Currys rubbish then MBNA refusing my section 75 claim.

Problem is it takes 2 months for the financial ombudsman to make a decision.🙄

Mylo75
Navigator
The financial ombudsman sent me a letter the other day saying it will be another 3 to 4 weeks before they look at my case. I've been en thinking I should have went straight to small claims court.
1 Like
Reply
Highlighted

@Mylo75 wrote:
The financial ombudsman sent me a letter the other day saying it will be another 3 to 4 weeks before they look at my case. I've been en thinking I should have went straight to small claims court.

Small claims isn't any quicker. I started my claim in December and am still at the awaiting mediation stage. I'm guessing the whole process is going to take several months.

From who? Currys? Or credit provider?

@Mylo75 wrote:
The financial ombudsman sent me a letter the other day saying it will be another 3 to 4 weeks before they look at my case. I've been en thinking I should have went straight to small claims court.

Why bother with the Financial Ombudsman at all?

Richierich99
Navigator
Email sent to curry's
Thank you very much for the offer of £1010, but I could not buy a tv with any kind of specification of what my samsung 65ks8000 is specd at.
I would be going back on myself and be in a worse position HENCE THE SmartThings EXTEND DONGLE.
Reason for waiting 2 years for the smarthings Extend dongle as it was in beta testing in 2017, as it only got dropped in 2018 due to technical reasons, but I believe its on the 2018 models the q8 series which should of been on the 2016 models.
I've had the tv 2 years
There is a 6 year limit on the consumer rights act 2015.
You seem to be treating this as faulty which it is not its for misrepresentation-misselling.
You say that this was not knowingly mis-sold then why are you still advertising the Samsung usb extend dongle curry's.. http://techtalk.currys.co.uk/tv-gaming/tv/how-to-control-your-home-from-your-smart-tv/ this is where I get most of my info from and products from, hence me purchasing my samsung ks658000 TV from and reading all your advertising. Or can I not take any info you place on your websites as truth??
I believe I'm entitled to a full refund and that is what I'm asking for.
Kind Regards
Reply email.......

Thank you for your further email dated 28th January 2019.  Andrew is currently out of the office, so I am responding in his absence.

I can confirm that unfortunately, on this occasion, we would be unable to honour your request for a refund.  Whilst we acknowledge your disappointment, we do believe that the television performs its primary function.

As previously indicated by Andrew, we do feel that the option to obtain a free of charge Samsung SmartThings hub ( V2 ) is a reasonable remedy, given that Samsung have taken the decision to not introduce the SmartThings dongle. The SmartThings Hub ( V2 ) can be obtained by contacting support@smartthings.co.uk and providing the following information:

In addition to the above, we have made an offer you a live with payment to the value of £150.00 to be paid as a BACS transfer. This offer is made on a without prejudice basis and was made in full and final settlement of this matter.

Further to the above, the alternative option of a contribution has been offered by Andrew as well.  This would take into consideration both the age and use of the product and take into account the depreciation of the television during this period.  This has been calculated at £1,010.00.

Regrettably, in this instance, we would be unable to offer any other resolution than that previously offered.  I offer my apologies for any disappointment.

They always ignore my facts and answers.

And my TV is full filling its primary fuction.,maybe to them but not for me it isn't!

From who? Currys? Or credit provider?

My claim is against Currys. I didn't pay on finance or credit card (foolishly)