With this and as before, the functionality of the Extend (being able to control all connected Smart Things through a central point) is achievable through the Smart Things Hub, which we are offering to you as an alternative. It is of course your decision whether to accept. "

Is that correct technically?

@yannis_i, I have just read your earlier posts. Good on you for making them have a meeting late on a Friday.

What you can do is very limited with the Smart Things hub. That hub, if supplied, still does not make the TV conform to the advertising. And they would have to supply you with a smart phone to use it with, of course.

@Read the earlier posts from @tarbat who needed it for his wife, he went into some detail about the differences and how the Hub was utterly unsuitable, but the original Extend Device would have been.

But the onus is not on you to explain "why you don't want it"! The onus is on THEM to explain how it's identical (it's not) and would put you in the exact same position you should have been in. They can't do this of course, bceause it's fundamentally different 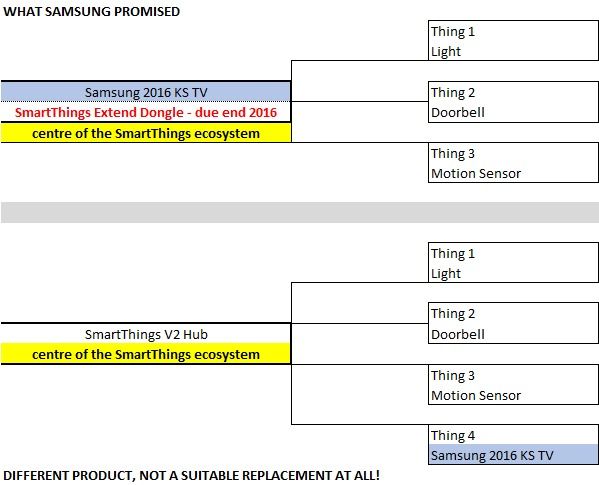 paul1277
Black Belt
Thanks for again digging that out as I was trying to find the wording and you beat me to it. That would also be useful in the KS refund useful info thread, so I can find it easily in future.
Paul
1 Like
Reply
Highlighted

mrtickle
Helping Hand
feel free to copy, it there, but I'm rather uncertain on how bomb-proof it is. I had the benefit of being a RS customer.

JL haven't replied to my e-mail yet stating that I'll take them to small claims court unless they agree to a refund. They have until Friday 27th.

I could section 75, but I don't have much faith in that honestly and I'd rather take it to court to help out everyone else here. I'm half hoping they'll agree to settle outside of court once they receive the court documents, as I'm completely new at this and quite nervous at the prospect of appearing in court.

Am I right in assuming if John Lewis loses this case in small claims, they will lose every time somebody takes them to court over this in the future?

yannis_i
Explorer
@mrtickle That is an excellent diagram that visualises better what I had explained numerous times to both JL and Samsung but they claim the opposite. Even worse, as you mentioned they phrase it in sentences that are technically correct on their own, but fundamentally they don't show how the solution they advertised is equal to the one they recommend, the two solutions are just alternatives. They must have wised up a bit after a few refunds and advice from their legal department and most probably they should be watching the same forum too.

Having them do a late Friday meeting was not my proudest achievement haha but hey, I spent many a night too, researching the law, this forum and writing lengthy answers to them, taking care to be technically and legally correct, considering that English is not my mother tongue too.

Thanks also for the great answer about which part of the Consumer Act is relevant for a full refund -I read here too that there is a difference between a faulty good (partial refund after 6 months) and a not as described one (full refund) but now we can point to the exact sections that state so.

JL replied to my Letter of Intent i sent by email with the same "We can only offer the Smart Hub" excuse, so the next steps is the reply to both of them if they can support the technical "equivalence of the solutions" in a court of law and whether they would like to reconsider their answers, an omnbudsperson complaint, the JL online ADR, a "Hail Mary" by visiting another John Lewis shop in person and explaining the situation just in case that way I can pull the strings better (I got the TV from Milton Keynes but in the meantime I moved to London), and then Small Claims court.

@Outcasst I would suspect that a win over small claims would create a legal precedent which would influence all future cases?

There's no case law or legal precedents set in County Courts, but a loss would mean they wouldn't be wise to force another claimant to take them to court again with the exact same claim as it would not be looked on favourably by the Judge.

It would also mean someone will need to take Currys to court separately but using the same argument as used in a loss for JL should result in the same judgement.

All the while, keeping a straight face and claiming you're the one being unreasonable for not accepting their tandem with saddle-bag "solution". "It goes on roads and takes you from A to B, what's the problem? Our lawyers have advised us that this will be our final offer".

It's just so crazy you can't engage on that level otherwise you legitimise it. Instead they need to answer your questions, instead of getting away with falsehoods like "we can only offer X". No, you can't "only offer X" because THE LAW requires you to give me a full refund.

@mrtickle wrote:
@Read the earlier posts from @tarbat who needed it for his wife, he went into some detail about the differences and how the Hub was utterly unsuitable, but the original Extend Device would have been.

If it helps, this is the part of the text I used for my EU ODR complaint about the difference between the EXTEND and the HUB:

"The only remedy that John Lewis have offered is telling me to contact Samsung to receive a SmartThings hub. This is a completely different solution, and fails in two respects. Firstly, it cannot be operated from the TV, and therefore doesn't match the promise made by John Lewis to "put your home under complete wireless control – all from your TV". And secondly, it requires me to buy a mobile phone in order to operate the SmartThings hub. As such, John Lewis have mis-sold the TV to me, as it is not as described, and never can be."

My EU ODR complaint is now just 7 days away from the deadline for JL to agree a dispute resolution body, which we know they won't.  Although I'm still 40 days away from the "last date for response" in my court case against JL, and my disgust with JL grows every day as my wife's requirement for Smart Things control from her TV has recently become more acute.

John Lewis and Curry’s sure are making life difficult for themselves.

They must realise that at some point it is going to go before a judge and they will inevitably rule in favour of the consumer which in turn is going to lead to added costs and compensation. They’re setting themselves up to lose millions on top of what they could have contained. They were better off just refunding each customer that made complaint rather than causing conflict and losing hundreds of loyal consumers.

This thread is spreading like wild fire as it is and everyday more people are coming forward with their disappointment of being mis-sold a television. When this eventually goes to a small claims court and the retailers lose they’re going to open up the flood gates for every single KS owner to return their TV. This will result in thousands more people claiming. Thousands more in compensation and costs, when they could have just simply accepted they made a mistake and exchanged the TV’s and kept the relatively small number of customers happy.

It really makes you wonder who it is they employ to run these companies because the way they’re handling things at the moment really is just plain stupid.

@Domaz1 - I agree that in most cases, Hanlon's Razor applies.

But in the case of these big retailers I can sum it up in one word - ARROGANCE.