I have a Samsung note 9.

I haven't tried the wall photo idea yet, but there are shadows around my set so it will not look good even if it worked. I'll let you know if I try it.

Well, I’ve gotten everything to work without all the craziness you had to go through, but it’s really pissing me off that I can’t use my own pic without the stupid frame around it. If you come up with a solution for that, I would love to hear it!!

As discussed supra,  Samsung and StupidThings CS eventually admitted to me (after lots of e-mails and hours on phone calls) that there's not a way to use your own images as background (i.e., w/o the Mono frame), notwithstanding what Samsung's ads and promotional materials say.  Their excuse seven months ago was that they were "working on it" -- the fact that they still haven't fixed/enabled this ought to tell you that this isn't exactly a priority for Samsung.

The only way I've seen to do this was the hack/kludge that was posted on the Samsung US Communities board a while back (before the cowards that run that place removed it).  It required using an Android device running the StupidThings app (the hack wasn't doable with iOS devices).
For it to work, you had to start by editing your desired image to get it sized precisely to your TV.  I did that by hooking the TV up as a separate monitor to my laptop, and ran some photo editing software with the desired image displayed "full screen" on the TV.  Keep resizing and color correcting the image until you get exactly what you want on the TV.  Save this image on your computer.
You then use the "take a picture of the TV on the wall" utility of StupidThings (Android only).  You'd then connect the Android device to the computer and find the "generated wall behing the TV" image that was just created (noting its gibberish file name and path).  You'd then delete that file and rename your saved desired background image to the name/path of the file you just deleted, and then use the Android device / StupidThings app to upload that image to your TV.   Essentially, you are spoofing StupidThings into using your image instead of the "generated wall behind the TV" image it created.
It's a very clunky and involved hack/kludge, and ultimately I was able to kinda get it to work (when it uploaded the image, StupidThings messed up the color correction of my image).  If someone will point me to how to embed / attach images to forum messages, I'll post a photo of what mine looks like.
As noted in an earlier message in this thread, however, it appears that the most recent version of StupidThings may have disabled this kludge.   And, of course, all of this begs the question of why Samsung has and continues to flat out lie about the features and capabilities of Ambient Mode.
0 Likes
Reply
Highlighted

I can see how that would of worked, and I can confirm I have not worked out any alternative methods (I work in IT so have tried a number of things with no success).

I suspect its because ambient mode does not support the resolution/picture size required to produce a full screen image - by this I mean an image of X Mb in size - a lot of these things have a file size limit that means the resolution and colour depth have to be quite low to meet the size requirement.  Clearly not as advertised and assumes that the 'background' to everyones TV is a simple no patterned blank wall (i.e. a low resolution / colour depth image).

I have also concluded though, that even in ambient mode I think I wouldnt want to leave my TV on all the time to show an image.  Its annoying that it doesnt do it properly, because as you say, its not performing as advertised, but I think I'm going to give up on it now.

On the upside, I've also just posted all my settings in another thread on this site as I have found a range of picture settings that make me happy in all viewing scenarios, and I have to say, I am pleased with the quality of the viewing image the TV produces.

Ambient mode and the unreliablity of recordings to a hard drive/presentation interface of recordings are both poor areas of functionality though that at this price point Samsung should certainly take more responsiblity for.

BTW, here’s how mine came out using the hack/kludge described above: 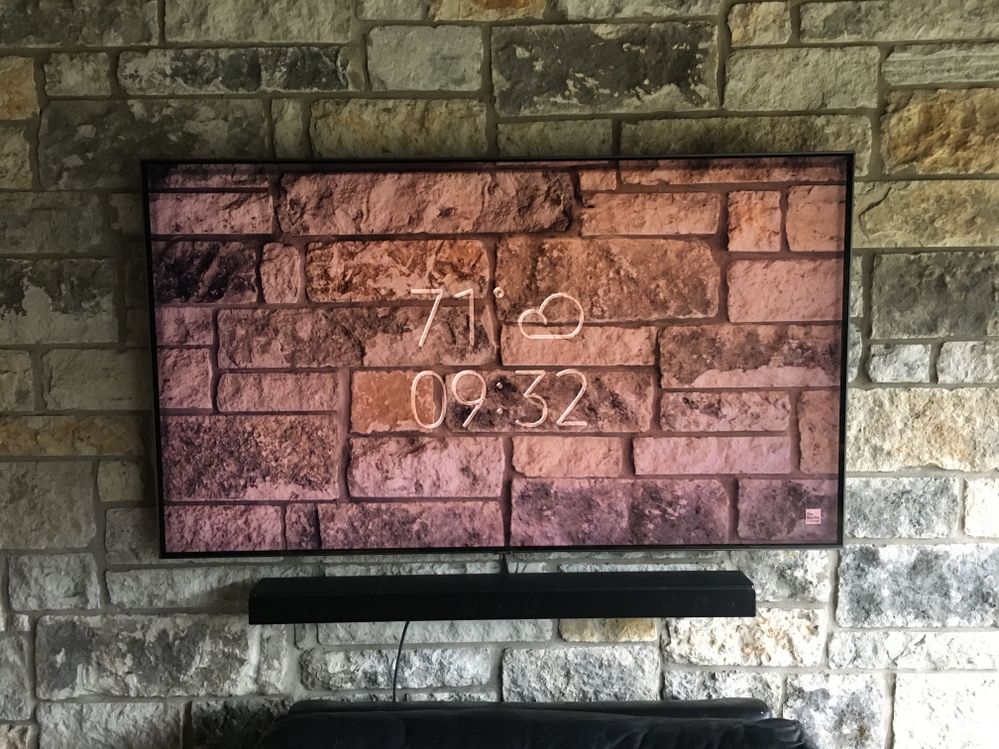 All I can see in the picture is a grey brick wall with a beautiful red brick inlay?

Sarcasm aside, wouldnt it be great if ambient mode did actually work like this....

by the way, even though that clearly isnt what you wanted, I think that looks great in its own right.  As the light changes throughout the day the image on the TV wont match you wall behind it anyway next to that window/light source.  But what you achieved there, despite it being a kludge, I think looks great.

LKB
Explorer
Thanks.  I took a good high-res photo of the wall before mounting everything.  A good photo editor made it not too hard to airbrush away the electrical/Ethernet outlets that are on the wall (behind the TV), and then play with the sizing / cropping of the image so that the grout lines match up (from dead on, about 2m from the TV -- if you change the viewing position it results in the grout lines not being as lined up as well as they are in this shot, due to the fact that the wall is about 10cm further away than the TV.   Can't change the laws of perspective . . . .
Depending on your viewing angle, the apparent color of the image on the TV changes too.  E.g., viewed from >30 degrees off  center, the colors are much cooler (and get pretty close to what the stones are in morning light [shown]).  As the day goes on, the colors of the stone wall do indeed change (it's a solarium with large southeast-facing windows), and of course everything changes in artificial light.
Of course, Ambient Mode is supposed to sense the amount of ambient light in the room and adjust the brightness of the Ambient Mode image accordingly  . . . yet another feature that Samsung touts but does not appear to have implemented.   And it certainly  shouldn't take this degree of experimenting / hacking / kludging to make a $3k device do what Samsung claims Ambient Mode is supposed to do out of the box.  Still, the overall effect is pretty cool.
0 Likes
Reply
Highlighted

Fully agree with your last paragpraph, it is too much like hard work to achieve the 'transparent effect' with ambient mode.  Equally, I have a few photos of nice artwork that I would like to sit in either full screen or plain black background, but I cant achieve that either.  Never mind.  What you did achieve is still cool though, despite the effort it took.

Aside from ambient mode, I have had my Q9 for a week now and I'm still pretty satisified with everything.  I got the 55" at a good price (less than £1500) and the quality of the image is pretty great.  Really considered the C8 but the burn in risk bothers me, plus, the wall mounting seems to be on the bottom half of the screen instead of the centre of the set, and im definately not moving my wall mount bracket at this stage lol - if it stayed as is the tv would be mounted unusually high and part of the bracket would be visible below.

Kurzie
Explorer
Thanks for summing up clearly the current status and your exchanges with Samsung support. I fully agree with your comments.

The ads and declarations made by Samsung in relation to this TV, as far as Ambient Mode is concerned, can be considered as misleading advertising (aka unfair commercial practice) towards consumers. If your choice of this TV was partly based on the Ambient Mode, and you live in the EU, you can return the TV to the retailer on these grounds (see here: https://europa.eu/youreurope/citizens/consumers/unfair-treatment/unfair-commercial-practices/index_e... your local country will have equivalent rules). Samsung and retailers can actually be subject to local fines due to this behaviour.

I'm still waiting to see a few weeks whether Samsung comes up with some form of remedy before returning the TV.
0 Likes
Reply
Highlighted

As far as “waiting to see a few weeks whether Samsung comes up with some form of remedy”, dream on.  Samsung has known about the problem with Ambient Mode, as well as much more serious issues with Q8’s and Q9’s, for many months, but refuses to even acknowledge them.

Take, for example, my biggest problem — recurrent issues with the ARC/CEC connection between the TV and a high-end Samsung soundbar.  Despite this problem being almost universally reported by users in the US forums (including some users who related stories of Samsung repairmen stating that Samsung was well-aware of the problem and had no idea of how to fix it), Samsung basically ignored the crescendo of complaints for months.  Eventually, a Samsung moderator on the US forums posted an official “solution” that decreed that there was actually no problem at all, because “that’s just how the CEC connection works.”  Not surprisingly, I and many other users called BS on this, pointing out that LG, Sony, and even older Samsung TV’s all used ARC/CEC connections without the problem, so it was impossible that it was something inherent to ARC/CEC.  Samsung’s response?  Censor the posts pointing this out.  When called out for this censorship, Samsung’s response was to ban me (and apparently others) from the US forums).

I could go on with more of my stories about how Samsung of late seems to have a problem of touting that their products do something, when they actually do not.  And, when confronted with indisputable evidence of this, Samsung either ignores the complaints or eventually says “you’re right, it doesn’t actually do what we claimed — too bad for you.”  Hopefully my point is clear:  what we are seeing with Ambient Mode is just one example of apparently systematic behavior of this organization.

I’d been a loyal Samsung customer for over 35 years (going back to when it offered the first inexpensive microwave ovens to US consumers).  No more.  The next time I am ready to drop serious coin on a TV, it’ll be an LG or Sony.