Samsung has Bamboozled Me after returning a brand new S9 !!!

Getting ready to send the following letter, along with additional photos and documentation to WTVD ABC TroubleShooter in Raleigh, North Carolina.  I have gone in circles with Samsungs Call Center for two months now, and I'm Pissed !

I need your help!  It’s hard to believe that a Company as large as Samsung would “Bamboozle” (could not think of a better term), customer.

This situation involves a new, Samsung Galaxy S9 phone that I ordered from their website this past November.  The phone was a Christmas present for my Son. This started out as my error when I ordered the phone, not realizing that the default color on the order page was “Lilac”.

When the phone arrived a few weeks later, on December 18th, I let my Son open His “present” early, since His old phone was not functioning.  When He opened the box and saw that His new phone was, as He called it; Pink, and being a young man, refused to even take it out of the box, saying: “ I can’t believe you ordered me a pink phone”!

Long, two-month story condensed; I obtained authorization from Samsung to return the phone, and due to Christmas being the next week, immediately ordered and paid for a second (black) S9.

The new phone arrived on Christmas Eve.. Yea!  But, a few weeks later, I am receive word from Samsung, telling me that the returned phone is being refused.  A few more weeks later, the phone shows up via FedEx, with a note inside stating that the refusal was based on the phones’ software having been “modified”.

I was livid!  We had not even taken the phone out of the box, let alone power it on!  Add to that, I’m 64 years old, barely no how to use my “Smart Phone”.  How in the world would I “modify” a phones’ software?

I contested this, and after another long wait, they sent me supposed photos of the phones’ display showing a “blown fuse” and “custom software”.  Nothing in that display showing that this was the phone in question, other than an overlay, which could have been imposed on any photo.

I took the phone to T-Mobile, our provider, and then to Best Buy at Brier Creek, where they had a “Samsung Experience” rep.  We put a sim card in the phone and it tested/worked fine.. no blown fuse, no “modified software”.  In the meantime, I’m left with a second, $600 charge on my credit card, and a Lilac S9 for which I have no need.

There have been more than 20 back and forth contacts between myself and Samsung, to no avail. And they refuse to answer my last response!  I need your Help Please! 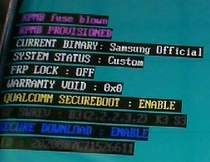 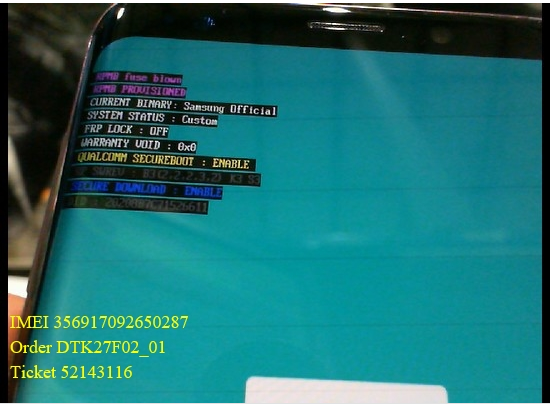 Fake photo with Generic overlay.  Nothing in the actual photo indicates that this is the phone that I purchased and returned!   >>> a "blown fuse" ? Seriously?

It's reasonable that Samsung will want to protect their products so would I assume fully check a returned item to ensure it adheres to their returns criteria.

That said engineers are human like the rest of us and as such human error can occur or the diagnostic machine they were using threw up an error message which they are referring to.

What this needs is someone from Samsung to take ownership and instill confidence back into the product for you so you can return it, receive a refund and get on with your life.

I'm sure the Samsung Team here will be in touch once they've caught up with your thread.

Thanks for sharing, I totally understand your anger with the whole situation. If I was in your shoes I'd be doing everything I could to get it resolved as well.

I'd like to be able to get this sorted for you, however as you've stated you're in North Carolina, and I'm with Samsung UK. Have you shared this with our friends on the Samsung US Community Board? Perhaps one of the mods on their can further assist you.

Say "hello!" and Introduce Yourself, or virtually hangout in the Samsung Lounge

hometechnc
First Poster
Thank you, I did not realize that I was on the wrong forum.
0 Likes
Reply
Featured Video